We’re always up for getting judge-y on the celebrity gowns at awards shows. The 2012 SAG Awards aren’t any different, though some of the celebrities made our job easier. Who made our best dressed list? The usual suspects, of course! 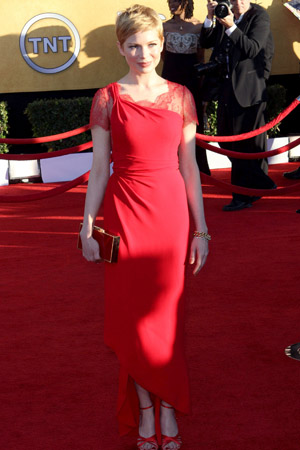 It looks like Marilyn Monroe rubbed off on her — she’s finally embracing her sexy side (and we love it!) Still, she’s not exactly comfortable with it.

“I wouldn’t say that that would be one of my first qualities as a human being — being sexy . . . and I think because my character on Dawson’s Creek was sexy . . . sexualized . . . sexual . . . I saw all the negative attention and connotations that can come along with that. And that those things can keep people from seeing you clearly,” she told GQ earlier this month.

Find out who won at the 2012 Screen Actors Guild Awards >> 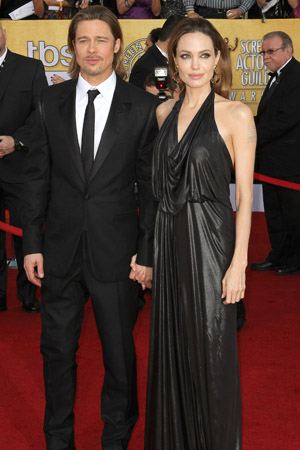 Angelina Jolie took a turn with color for the 2012 Golden Globe Awards. However, she went back to her signature color — black — for the SAG Awards with the draped Jenny Packham gown, vintage House of Lavande jewels, Gucci shoes and Louis Vuitton bag.

Whoa: Vintage is not something we’re used to seeing on the edgy beauty.

“I wanted to be comfortable,” she told US Weekly on the red carpet. “I always liked vintage jewelry. I don’t often wear it.” 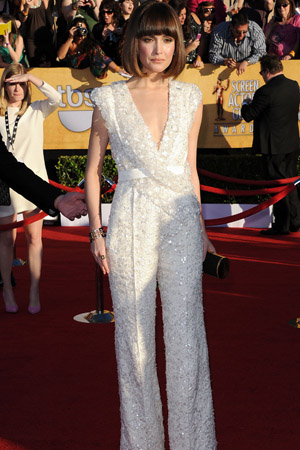 Bridesmaids actress Rose Byrne made our best dressed list solely for this reason: She opted for a stunning pantsuit instead of the typical gown. The stunning 32-year-old’s Elie Saab jumpsuit apparently caught her eye right away — and we’re glad she chose it!

The only thing we’re not digging? Her blunt bangs — they look really severe on her thin face. 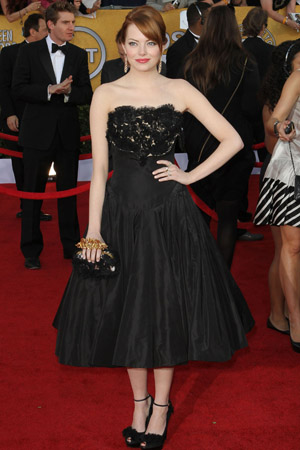 Emma Stone is another starlet we want to permanently pin on our best dressed lists. The 23-year-old star of The Help wore a custom Alexander McQueen dress with Tiffany and Co. jewels. Loved. It. 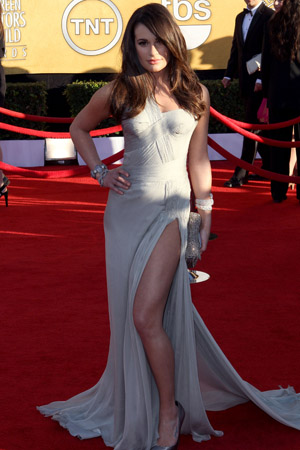 We’ve said it once, and we’ll say it again: Lea Michele knows how to dress for the red carpet. The Glee star went for a thigh-high slit on her Versace dress, Lorraine Schwartz jewelry, Fendi bag and Casadei shoes.

Who were your picks for best dressed at the 2012 SAG Awards?

Read on for more best and worst dressed