We love our go-to bags (slouchy shoulder for day, oversize clutch for evenings), which got us thinking about all of the other women who have a preferred purse that they not only love, but which actually defines their personal style. There are many famous women (past and present) who use a purse to make a statement and we looked into a few of the most popular. 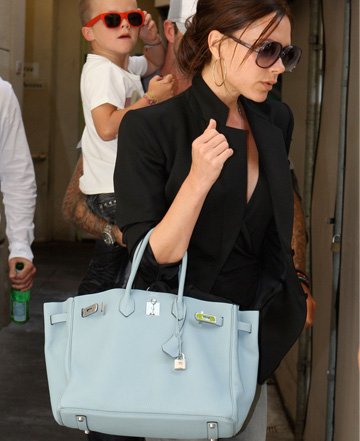 We asked Emmy Award-winning stylist David Zyla to provide some more insight into the purses carried by the well-known women we love. “Handbags have become a symbolic reflection of personality, status and aspiration and tell us much about the personality of the carrier,” he says.

Margaret Thatcher was rarely spotted without her hard-cased rectangular polished black Asprey or a similarly styled handbag. “Ultra-businesslike and unfeminine, her handbags, according to her former political secretary, were ‘props,’ produced in a visible manner at meetings to show that she meant business,” Zyla explains. “So synonymous with Thatcher, that in the 1980s to be sideswiped by Margaret Thatcher was to be ‘handbagged.'”

Singer-songwriter, dancer, model, actress, fashion designer and businesswoman, multitasking mom Victoria Beckham is known worldwide for her collection of over 100 ultra-chic Birkins (must be nice!) “She is so closely identified with them, that when she was spotted at Heathrow Airport in London toting a Goyard ‘Overnight’ bag, it was newsworthy,” Zyla tells us. “The Birkin perfectly accentuates Victoria’s sleek architectural updated 1960s aesthetic.”

While not known for any one specific handbag (in fact she is only occasionally seen with one), Michelle Obama has proved that her all-American clean-cut style is one that women want to emulate, Zyla says. “Last March she carried a $1000 Reed Krakoff handbag to a parent-teacher conference. The two-tone teal tote sold out globally in just a few short days.”

A smart and sophisticated boxy frame Hermes handbag was made famous by Grace Kelly when she used one to conceal her baby bump. The bag was subsequently dubbed the “Kelly” bag. This particular style fit perfectly with the star’s simple but elegant aesthetic and to this day represents a woman who likes to balance fashion with function.

Most of the attention during last spring’s royal wedding may have been on the Prince William and Princess Catherine (and maybe Pippa‘s white maid of honor dress), but the Queen also made a few fashion waves. The cream Launer handbag she carried shot up in sales by 60 perfect following the nuptials. The purse is sturdy, sophisticated, classic and practical – perfect for royalty.

Of course one of the people who you would think to be handbag-obsessed is actually not terribly interested in them at all, Zyla says. “Handbags weigh you down,” the stylish editor of Vogue has been quoted as saying. “Instead, she carries what she needs: some cash, a notebook and a cell phone,” he adds. “This choice, which seems to come from a place of total practicality, might just yield the most powerful image of a handbag yet: the absence of one!”