Did you spot Kaley Cuoco’s cute, quirky manicure on the red carpet at last night’s People’s Choice Awards? We sure did! 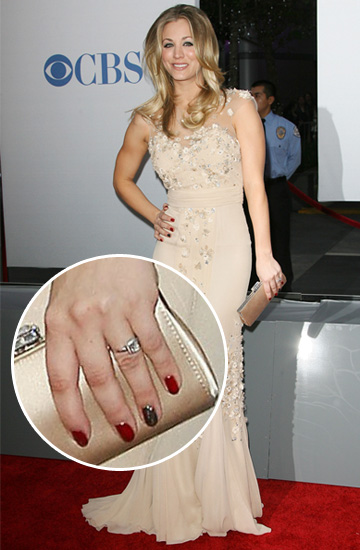 When you think of manicures, you usually envision two hands with the same color polish on each nail, right? Well, if you’re Kaley Cuoco, not necessarily. The Big Bang Theory star and People’s Choice Awards host showed off her unique manicure on the red carpet last night and got us rethinking the meaning of a manicure.

The sexy star sported her trademark “lucky” manicure with two-toned nails styled by OPI celebrity manicurist Beth Fricke. Cuoco opted for OPI Nail Lacquer in Bastille My Heart on all her nails, except on her two ring fingers, which were colored with Nicole by OPI Nail Lacquer in Follow Me on Glitter.

What a cute, fun way to spice up a manicure, huh? We’ve been seeing new nail trends this whole year — Katy Perry’s nail art and the ever-popular half-moon manicures come to mind right away — but this manicure is a really quirky kind of idea.

We want to know: Would you wear a two-toned manicure? Share in the comments below!