Rachel McAdams emerged as a Hollywood darling after starring in 2004’s tearjerker The Notebook. Since then, the Toronto native has starred in a diverse array of roles, including Morning Glory, Midnight in Paris and Wedding Crashers.

This year marks McAdams’ return to romance with her upcoming film co-starring Channing Tatum: The Vow. McAdams looks pretty girl next door in the trailer, but she revealed her wild style in a new interview with Glamour. 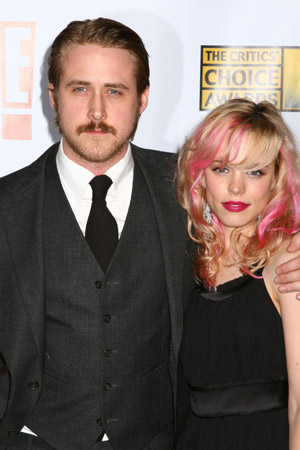 Why do we love Rachel McAdams? She isn’t afraid to take risks.

“I always wanted pink hair,” McAdams said of her 2005 venture into pink territory. “I wanted to do my whole head, but my hairstylist, Robert, was like, ‘How about we start small?’ I absolutely loved it. I still think about doing blue at some point, but I don’t like to change my hair before I’m about to do [a film] — you never know what that character’s going to be.”

We love a girl who isn’t afraid to take risks with her look. However, she’s not willing to be unbelievable on film.

“You try on wigs, shoes and clothes. It’s preferable when it’s not about looking pretty. It can get a little dull to just be cute,” Ryan Gosling‘s former girlfriend said of her character preparation process. “We talk about things like, maybe my character can’t afford these Christian Louboutins. [The stylist] will say, ‘No one will notice.’ And I’m like, ‘Everyone knows that red-bottom shoe!'”

There is one thing we didn’t know about the stunning actress, though: She used to be a competitive figure skater. However, it was more about the clothes than the routines.

“I definitely was in the sequined, bedazzled era. We would put blue eyeshadow up our eyebrows, and glitter all over our faces. I probably put more effort into my skating outfits than my clothes,” she joked.

Do you like Rachel McAdam’s style, or is it too plain for you?