Justin Bieber’s Someday perfume for women can do no wrong when it comes to Beliebers – the scent won the coveted Fragrance of the Year Award from fashion bible Women’s Wear Daily. 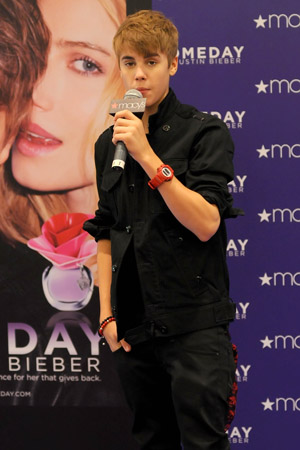 “Justin Bieber’s debut fragrance, Someday, shattered sales records, posting numbers that the celebrity scent category hasn’t seen since the days of J.Lo’s Glow,” wrote WWD. “Of course, the idea of a pop idol launching a fragrance is nothing new. But Bieber and his licensee, Give Back Brands, came up with a business plan that proved irresistible to buyers: The proceeds of Someday were earmarked for a variety of charities, making the fragrance a guilt-free indulgence during a period when consumers were still wary about spending on luxuries.”

Stores can’t keep the fragrance stocked on store shelves during this holiday shopping season. Current sales figures aren’t yet available, but Someday made over $3 million dollars in the first three weeks after its release in June. Better yet, the profits go toward causes that are close to Bieber’s heart, including Pencils of Promise and the Make-A-Wish Foundation.

Bieber’s work with charity has earned him the respect of others in the entertainment industry, including actress Sophia Bush.

“Bieber’s doing a great thing. He’s a young superstar who could just be concerned with himself and his fabulous life. He is incredibly passionate about changing the lives of children around the world, and I think that is really commendable for a 17-year-old,” the actress — and Pencils of Promise volunteer — told OK! Magazine.

The popularity of Someday hasn’t stopped the “Baby” singer from promoting the fragrance. A new commercial starring the Biebs talks directly to his female fans’ fathers.

“So the next time you hear her scream my name, relax,” says Bieber. “It’s better than hearing her scream ‘Joey’ who lives next door. Am I right?”

Do you wear Someday by Justin Bieber?

45 mins ago
by Summer Cartwright