Food composting isn’t just for hippies who like to create their own garden mulch. This green way to deal with food waste — and something that many families do in their own homes — is catching on in the business world. And it makes perfect sense. Keep reading to learn more about food composting on a grand scale.

Related story How to cloth diaper on the cheap 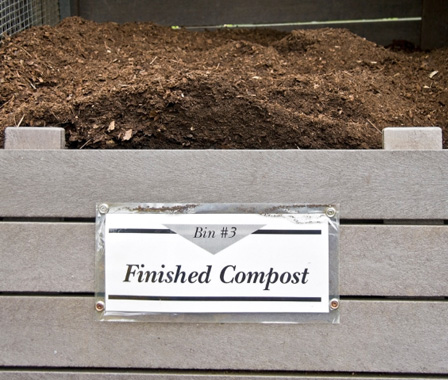 Remember when, once upon a time, we heard about companies participating in recycling programs? It was novel and new — and smart. Today, the newest green movement among corporations is food composting.

In August, a pioneer commercial food composting program that collects food waste from grocery stores was launched by Waste Management in San Diego. It’s the first of its kind in the U.S. Its purpose? To lessen the staggering amount of food that is dumped into landfills each year.

Sign On San Diego reported on it a few months ago, noting that 34 million tons of food waste are generated annually in the U.S. A measly 3 percent of that is recycled.

While other cities such as San Francisco have residential food composting programs, San Diego is the first to create a food waste route that collects from grocery stores. The scraps don’t end up in the landfill, an idea that doesn’t seem novel — but really is.

Learn how to green every part of your life >>

Saving landfill space and the air

Carvalho summed it up perfectly: “We don’t want to run out of space in the landfill because we’re burying materials that can be reused.”

In only one of San Diego’s landfills, 140,000 tons of food waste is dumped annually. Imagine if even half of that could be composted. In addition to freeing up space, it would reduce greenhouse gases.

Composting is the ultimate in recycling >>

While the grocery store route is new, many San Diego establishments were already contributing food waste to the composting program. According to CalRecycle, the San Diego Convention Center, airport, baseball stadium, SeaWorld, university campuses, military facilities and more were all part of the innovative food composting plan.

The Hilton San Diego Bayfront Hotel was the first hotel in San Diego County to join the program, notes the City of San Diego. While it already did one very socially responsible thing — donating all edible food to local charities — its decision to begin food composting has been even more environmentally friendly and financially viable.

During its first eight months of participation, the hotel composted 124 tons of food waste and diverted 11 percent of its waste stream. It also saved $8,000 in landfill fees and waste transport costs. While that’s not a huge amount of money for a large company, it is still a savings, not a cost. And when that savings also saves the environment, how can anyone complain?

What happens to all of that food?!

Currently, the Miramar Greenery accepts food for composting. The facility and its trained employees are capable of turning the food into a rich compost product. It can then be used improve soil texture, increase the nutrients in soil and increase soil’s ability to hold water.

The new way to live green

If you recall the early days of recycling, when all you could place in the green bin was cardboard and glass bottles, it seemed new and unusual. Today, recycling is a given part of daily life (or at least it should be). Hopefully, as more companies get on board with food composting, the program will expand to include residential service across the country.

If a residential food composting service were available, would you participate?