Angelina Jolie is now a director, thanks to the upcoming release of her film, In the Land of Blood and Honey. She’s also doing the best to look like a serious director with her simple red carpet look at the film’s Monday afternoon premiere. 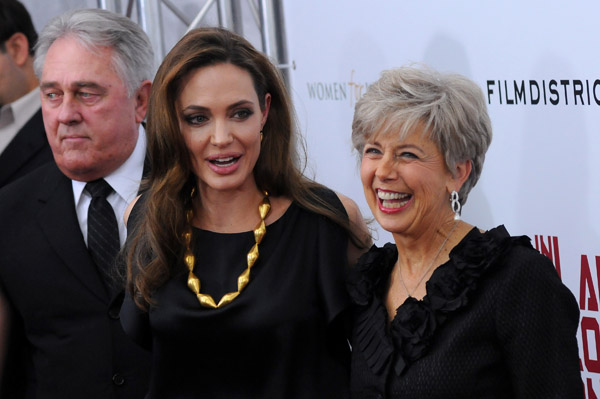 Jolie walked the red carpet dressed in a loose black top by Joseph and a black Ralph Lauren skirt. She accessorized with Cole Haan shoes and Ofira jewelry.

Her best accessories? Brad Pitt and his parents, Bill and Jane Pitt!

The film also marks Jolie’s first real screenwriting experience as well, though a Croatian journalist says she stole the concept. 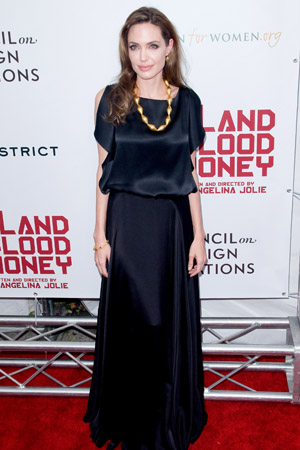 The mother-of-six hasn’t spoke about the allegations, but she is talking about the film.

“I was thinking and meditating on these international themes of violence against women, lack of intervention and how human beings are changed and warped by war and how some people come out stronger and some people are truly broken,” she said of the inspiration.

Oh, and those six adorable kiddos come up from time to time.

“The kids asked me the other day and I asked them if it was just because they wanted to have a ‘big cake,'” she laughed. “They see movies that have the people getting married in the movies or somebody’s, you know, the happily ever after. Shrek and Fiona are married,” Jolie told ABC’s Christiane Amanpour in an interview.

“We’ve explained to them that our commitment when we decided to start a family was the greatest commitment you could possibly have. Once you have six children, you’re… you’re committed.”

What do you think of Angelina Jolie’s premiere look?

Read on for more celebrity style