As they said at the end of this season’s True Blood, ”zombies are the new vampires.” We know many of you want to be zombies for Halloween, but how the heck do you do that? We’ve got a few tips to help give you that undead glow. So gather up your ripped clothing and mess up your hair. It’s time to eat brains… I mean, get in costume! 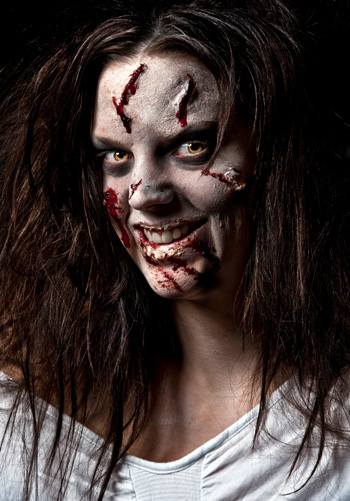 Now, none of us are going to be able to replicate makeup artist (and executive producer of The Walking Dead) Greg Nicotero’s amazing zombie makeup, but if you must be undead this Halloween, here are a few tips.

First, cover your face with gray eyeshadow. Avoid the sparkly ones, unless you want to be disco zombie or do the Twilight version of the undead. Use a big fluffy brush to give yourself that graveyard pallor. Add a little dark blue lipstick and smear some liner around your eyes. Use a slightly darker gray shadow to hollow out parts of your face. Use it under the eyes, under the cheekbones, under the chin and under the corners of the mouth to make yourself look sunken in.

Next comes the fun part. Grab some tissues — we prefer the blue ones, but any will do. Rip off little bits and cover them with lash glue. (Make sure to use the glue for strip lashes and not for individuals. If it’s the clear stuff, it’s going to stay on there for a while.) Add them all around the face to make it look like your skin is peeling off, and dust with shades of blue, gray and brown shadow. For an extra touch, add fake blood. We take no responsibility for the brains you eat.

Watch: How to get zombie hair

Complete your zombie look with this hairstyle!