If you’ve ever wondered what really goes on behind the scenes at New York Fashion Week or wished you could get a little closer to the action, now you can – or at least get a taste of all the glitz, glam, drama and excitement. Eila Mell is the author of a new book called New York Fashion Week: The Designers, The Models, The Fashions of The Bryant Park Era, and we can’t wait to sink our teeth into it. 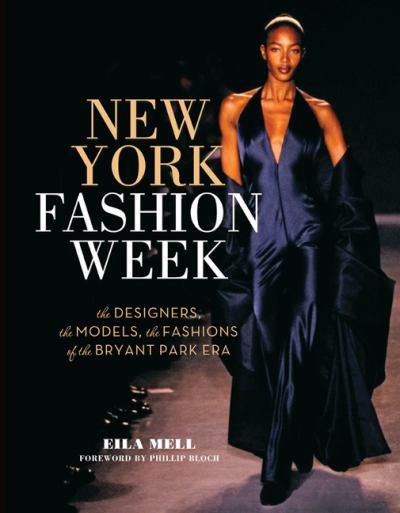 Fashion Week as we know it wasn’t always so full of glitz and drama. In 1943, an event known as “Press Week” shined a spotlight on the American fashion industry for the first time, and later became the tradition known and celebrated today as Fashion Week. For the first few decades, designers presented their collections, not on runways, but in showrooms, hotels, nightclubs and restaurants throughout New York City. In the early ’90s, the Council of Fashion Designers of America changed all that and elevated the American fashion industry by organizing and centralizing Fashion Week at one location – Bryant Park. The rest, as they say, is history.

The allure of Bryant Park

From 1993 to 2010, Bryant Park was synonymous with high fashion. Under those famed tents, designers from Donna Karan and Diane von Furstenberg to Oscar de la Renta, Versace and Calvin Klein took fashion from something you merely wear to something much bigger and more powerful. And who can forget the rise of the supermodel? Who can forget the star power of catwalk queens Cindy Crawford, Naomi Campbell and Linda Evangelista who managed to use their collective allure to help put New York Fashion Week on par with Paris and Milan. New York Fashion Week covers the complete history of the Bryant Park years season by season. Filled with hundreds of never-before-seen photos and never-before-told stories from the leading names in fashion, Mell’s book peels apart the layers of 17 years under the tents of Bryant Park. It’s the next best thing to having been there to see it yourself.

6 hrs ago
by Krista Bennett DeMaio