Christina Hendricks was her usual scene-stealing self at the 2011 Primetime Emmy Awards. Was her body-hugging silver dress a big winner or a big loser? 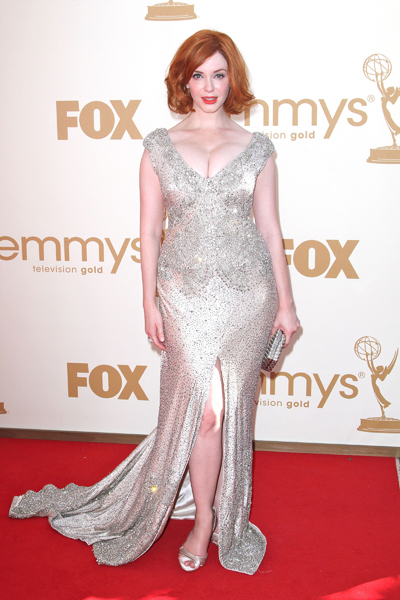 We’re no stranger to the red-headed star’s revealing couture, but not everyone is loving her Swarovski-adorned Emmy dress.

“We couldn’t tell where he dress ended and her skin began,” one International Business Times critic wrote. Another critic blasted her for sporting “muted” colors.

Our thoughts? She’s one of the top 10 best dressed ladies of the night. We love a girl who isn’t afraid to boldly show off her curves. Hendricks is definitely a confident — and gorgeous — woman.

The only suggestion: pick a bit higher heel next time, Christina; the shorter pumps and long dress do nothing for her gorgeous gams.

Christina Hendricks: ‘My dress is glamorous’

It didn’t take the Mad Men star long to pick out her Emmys dress — the couture gown by an up-and-coming Australian designer was love-at-first-sight!

“This dress is actually the first one I tried on. I just thought it was glamorous,” Hendricks told Celebuzz on the Emmy red carpet.

Her style evolution over the years is largely thanks to Joan, her character on Mad Men.

“I think so. I think I’ve learned from her and learned from Janie Bryant, the show’s costume designer,” Hendricks told the New York Times last week. “I think I’ve probably streamlined things a little bit. I certainly have a lot of pencil skirts in my closet these days, and I can safely say that I didn’t have any before Mad Men.”

Check out SheKnows’ exclusive interviews on the Emmy red carpet!>>

Love it or hate it?

It seems like there are two types of people: those who loved Hendrick’s Emmy Awards dress, and those who hated it. We’re going to stick with love — tell us what you think of her dress?

TELL US: Was Christina Hendricks’ daring Emmy dress a do or a don’t?

Bling, bling! Check out the pricey baubles celebrities rocked at the Emmys
Get Emmy looks from your favorite characters
Get Nina Dobrev’s Emmy makeup look