Last night’s Emmys gave us some great looks and presenter Kerry Washington was certainly one of them. That beaded red dress was beyond striking but so was her makeup. We’ll teach you to do the very same thing. 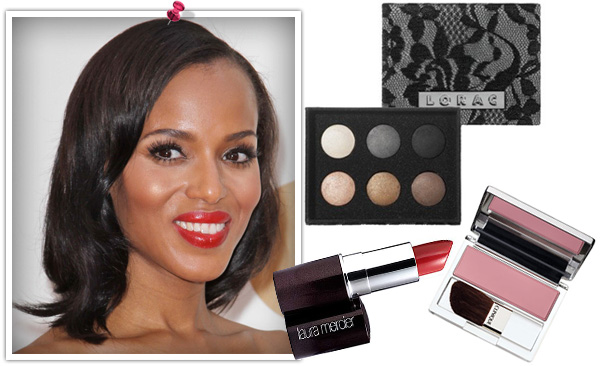 Kerry Washington sported a stunning look last night. She’s a true Hollywood classic. She was a presenter at last night’s Emmy Awards, hosted by Jane Lynch. Here’s how to recreate her stunning makeup on your own face.

Washington had perfectly groomed and well-defined brows, something that was a definite trend on the carpet last night. Under those brows, Washington had a soft shimmer on the brow bone. On the lids, she had a pale silver that made her eyes pop. She used a mushroom in the crease with a black eyeliner completing the look. To do this yourself, we suggest Lorac’s Ooh La Lace Baked Shimmer & Matte Eye Shadow Palette. It’s got all the colors you need, and Lorac is known for their fantastic pigments that go on smooth and even. Use the deepest color with a wet brush to line your eyes and finish with lots of mascara.

Washington kept her blush soft, another trend we saw on the carpet last night. She went with a soft plum blush. Now, plum can be a bit difficult to work with, so make sure you start with a clean, fluffy blush brush and tap off the excess so you don’t overdo it. We love Clinique’s Blushing Blush Powder Blush in Smoldering Plum.

Washington made her lips the focal point of her look last night and went with a soft red to play off that amazing dress. It wasn’t a fire engine red, though. It had some pink undertones. We suggest Laura Mercier Lip Color in Tender Lips. It’s a great sheer red that still gives you some impact. Put it on, break out that red dress and you’re good to go!

13 hrs ago
by Summer Cartwright