If you watch the Emmys on Sunday, you may see your favorite primetime celebs strolling down the red carpet. While the color may appear red, it’s actually green! Confused? Keep reading for details. 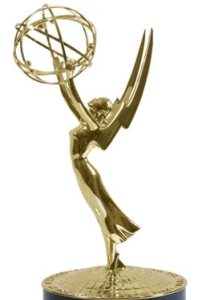 The 63rd annual Primetime Emmy Awards are airing on Sunday, September 18th at 8:00 p.m. Eastern and while they may appear similar to years past, a few things are very different. FOX is going green for this year’s Emmys. You’ll still see all of your favorite primetime celebs looking fabulous, but a lot of what you won’t see will make a big impact. Or, more accurately, less of an impact.

FOX is really greening up the Emmys. Let’s start with the red carpet. While it’s technically red, it is most certainly green! The 25,000 square foot red carpet is locally sourced and made of 50% recycled materials. It was made in the only LEED-certified carpet facility in the world. The best part: After the Emmy’s are over, it will be donated to Ronald McDonald House Long Beach and to Habitat for Humanity of Greater Los Angeles.

It doesn’t stop there, of course. FOX is cutting down their power consumption by utilizing 200 locally-manufactured solar panels. For five days before the Emmys, the panels will collect power — enough to keep a single family home running for two months. And again, Fox is donating these solar panels after the Emmys. Habitat for Humanity will receive them, allowing the organization to build greener homes throughout Los Angeles.

FOX is also covering the basics. All of the biodegradable items from the Emmys — food and biodegradable disposables — will be composted. Recyclable materials will be sorted and recycled. Staff and crew will use bicycles instead of golf carts. Locally grown and organic foods will be served. The list goes on.

Thumbs up to FOX for helping to protect our planet by greening up the Emmys!