What in the world were Nicki Minaj and Anna Wintour doing together during New York Fashion Week? 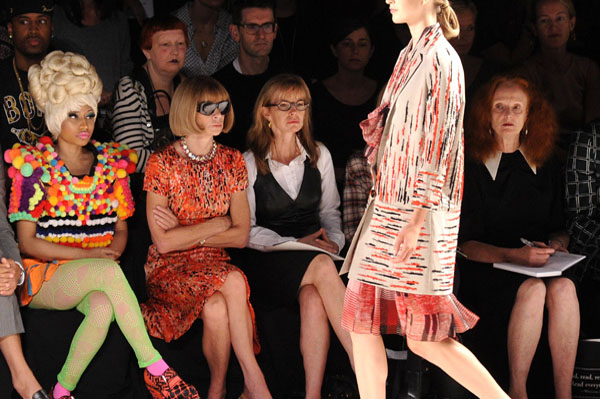 If someone asked us if the It couple during New York Fashion Week would be Nicki Minaj and Anna Wintour, we would have laughed you out of the room. Sure, Minaj is known for her fashion-forward style, but Vogue’s iconic editor in chief surely wouldn’t approve of the colorful style.

Guess we were wrong.

Minaj and Wintour have emerged as the BFF’s of NYFW, sitting together in the front row of both Carolina Herrera and Oscar De La Renta’s runway shows this week.

“With the amazing Anna Wintour of course ;),” Minaj tweeted along with a photo of her and the icy Wintour.

However, the self-proclaimed Barbie apparently had trouble getting into the show with her blond beehive and pom-pom dress.

“Nicki is here, she says she’s being harassed and that someone has to come get her! Someone go get her!” a Herrera staffer reportedly yelled into a microphone before the show, according to E! News.

The show was stalled until Minaj could get in her spot; the rest went off without a hitch, even if Wintour did look a little chilly.

The BFF romance between Wintour and Minaj continued at the De La Renta show Tuesday afternoon. 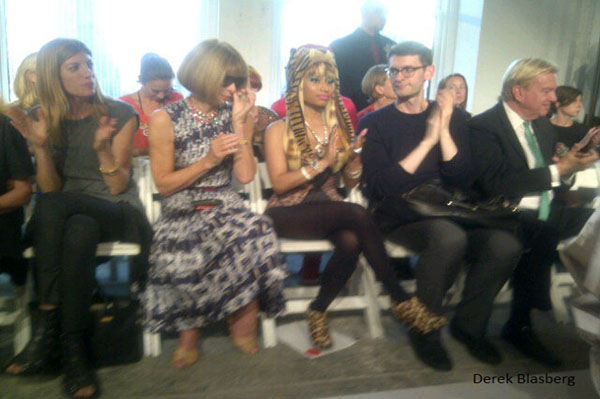 “Oscar De La Renta w/my date Anna Wintour again. Oscar is a very handsome man. So is Valentino. Tell ya all about the collection in a bit!” Minaj tweeted.

Minaj’s outfit was decidedly wilder this go ’round, complete with animal hat. It was, uh, interesting — but fitting for the eclectic rapper.

So, all of this love between Wintour and Minaj has people talking about a possible collaboration between the two.

“With all the nick minaj blitz fash week media blitz does it mean she’s gonna be in the cover of vogue?” fashion blogger Bryanboy tweeted.

We have to agree, Bryanboy.

What do you think: is Nicki Minaj getting ready for her cover girl pose?