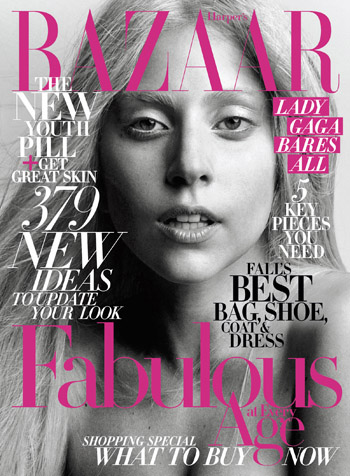 Lady Gaga’s done it all on magazine covers: she’s worn a machine gun bra, had three heads in V Magazine and went in drag for Japan’s Vogue Hommes.

Now? The one we call Gaga is naked on the October issue of Harper’s Bazaar, meaning no make-up!

“Whether I’m wearing lots of makeup or no makeup, I’m always the same person inside,” she told HB for the issue. The Born This Way singer is adamant that she hasn’t had plastic surgery since hitting the big time.

“I have never had plastic surgery, and there are many pop singers who have,” she said. “I think that promoting insecurity in the form of plastic surgery is infinitely more harmful than an artistic expression related to body modification,” she told the magazine earlier this year. 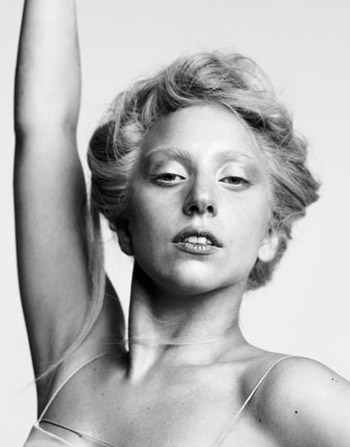 She feels this way because of her Little Monsters.

“I think what has been lovely about my relationship with the public is that they expect something unexpected from me,” she added. Uh, yeah — going in character as Jo Calderone at the 2011 MTV VMAs is a bit unexpected.

It’s been with her all her life.

“I’m very free-spirited,” Gaga said. “Even when I was a kid, I used to run around naked with the babysitter, driving her crazy.”

The singer also credits her carefree ways to dance and “I do yoga, I do Bikram and I run, and I eat really healthy. You know, my work sort of feeds me. I keep in shape by working hard.”

We’re not really sure about all of that — especially since she told a Los Angeles radio station that she doesn’t eat.

No matter, we love that the 25-year-old is confident enough to go (almost) make-up free on the cover of a major magazine. She looks good without it, save for the overly-dyed blonde eyebrows.

What do you think about Lady Gaga’s make-up free Harper’s Bazaar cover?