It looks as though Marc Jacobs is in serious talks with Dior about taking over John Galliano’s top spot as creative director. Though there have been many contenders since the abrupt firing of Galliano after his drunken, anti-Semitic outbursts, it’s becoming clearer and clearer that Marc Jacobs may be going from Louis Vuitton to Christian Dior.

Related story Save Up to 90% On Brands like Hydroflask, Draper James, & More at Nordstrom Rack's President's Day Sale 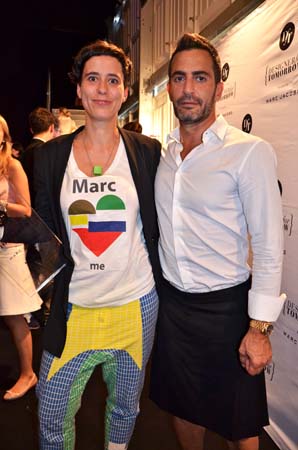 the possible move to dior

As reported by Women’s Wear Daily, Marc Jacobs is in the spotlight to take over the position for the next creative director of Christian Dior.

Apparently, there are a set of meetings between Dior representatives from LVMH and Marc Jacobs’ legal team to talk about the position this week in Paris.

LVMH, Louis Vuitton Moet Hennessey, is a luxury conglomerate that owns high-end brands such as Louis Vuitton, Marc Jacobs, Christian Dior, Fendi, Givenchy and many others.

Women’s Wear Daily also reported that if Marc Jacobs were to head to Dior, he would leave his creative director position at Louis Vuitton, possibly enabling Phoebe Philo, creative director of LVMH label Celine, to take over his position.

Though as far as we can tell, these talks of Marc Jacobs heading over to Dior are just rumors considering reps at Dior and Jacobs haven’t commented or confirmed any of these rumors just yet. So, in the meantime, we can ride this rumor wave out and think of all the creative fashion inspiration Jacobs could bring to Christian Dior.

18 hrs ago
by Kristine Fellizar