Glee star Dianna Agron just debuted pink hair. Do we love it or hate it? 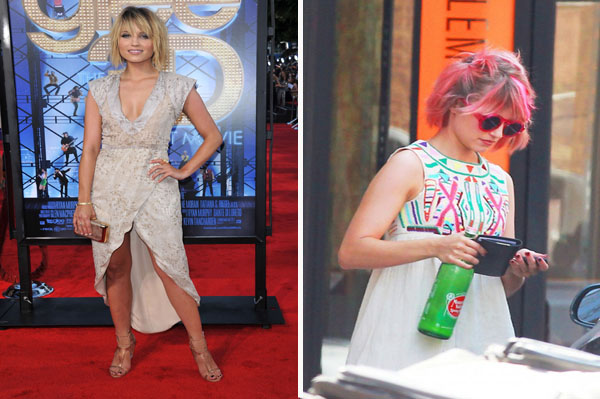 What is it with celebrities and bright hair dye this summer? First, Lauren Conrad dyed her hair in rainbow colors in honor of the Fourth of July. Then, Katy Perry went from black to blond to pink hair.

The latest? Glee’s Dianna Agron added pink color to her new short style. The actress — on the cover of this month’s Cosmopolitan — stepped out in Los Angeles on Thursday with the messy style.

Learn how to get Evan Rachel Wood’s short style>>

Do we love it? The jury’s still out. We love the self-expression, but this dye job looks pretty haphazard and not that flattering for the gorgeous Agron. We can’t help but think it’s a style for the upcoming third season of Glee — after all, we doubt Ryan Murphy and the gang would just let her dye her hair pink on a whim.

“Season 2 wrap. A remedy to the seven year itch. Finally!” Agron wrote on her Tumblr blog after cutting her hair in May.

“Everyone needs the freedom of just cutting it all off every now and then!” photographer pal Tyler Shields wrote after photographing the star.

It seems like Agron’s summer of hair experimentation is her form of rebellion. After all, she sees what happened to Lindsay Lohan and doesn’t want to end up like her.

“It’s really sad looking at people like Lindsay Lohan. She’s an amazing actress, but you see what happens when people know too much about your personal life,” Agron told Cosmopolitan. “They start not being able to look at you the same way professionally. I don’t want that to happen to me.”

Well, we’ll deal with the pink hair if it means you won’t turn into some hard partying star, Dianna.

13 hrs ago
by Summer Cartwright