Shark Week is here, and that means we’re talking about all things shark. Shark attacks fascinate many of us, but not in a good way. The idea of happily swimming in the ocean or surfing the waves — and then suddenly being attacked by a shark is scary! While it’s just a distant fear for most people, a shark attack is a reality for a few. We’ve rounded up three stories of shark attack survivors. Keep reading for their scary stories and uplifting tales of survival. 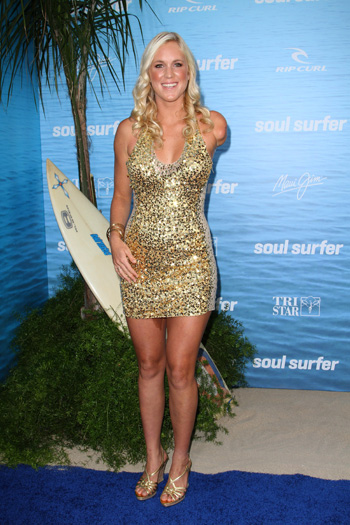 Bethany Hamilton entered and won her first surf competition when she was 8 years old. Over the next several years, her skills continued to improve and she became a great surfer. When she was 13 years old, Hamilton was on her surfboard when a 14-foot tiger shark attacked her, completely severing her left arm. Hamilton lost more than 60 percent of her blood, but she survived the attack. She underwent many surgeries, somehow avoided infection and recovered.

Just one month after the shark attack, Hamilton was back in the water and in 2007, she turned pro. In 2004, Hamilton published her autobiography, Soul Surfer. That book was the basis of the movie Soul Surfer, released this summer. Bethany Hamilton is a truly inspiring shark attack survivor!

Henri Bource was swimming with seals, along with other divers, off the cost of Australia in 1964 when he was attacked by a great white shark. The shark came up from below Bource and bit off his leg. His friends heard his screams and saw his severed leg.

They helped Bource onto their boat, where Bource told his friends his blood type. They radioed that information to those waiting on land. Bource survived the attack and turned it into a documentary. An amateur photographer/filmmaker, Bource pieced together some original attack footage to create Savage Shadows — although we’re not sure we want to see that …

Check out these 5 different species of sharks >>

In 1963, Rodney Fox was spearfishing in an Australian competition when a great white shark grabbed him and took off. The shark released and re-attacked Fox several times. He nearly drowned during one of the incidents when the shark took him underwater, but he was eventually pulled into a boat.

His rescuers left Fox’s wetsuit on his body, a smart move because it reportedly kept his internal organs “in place,” potentially saving his life. Once at the hospital, doctors cut off Fox’s wetsuit and discovered the extent of his injuries. Every one of Fox’s ribs was broken, his lung punctured, a hole was bitten into his shoulder blade and his spleen and main artery (from his heart to his stomach) were exposed.

As Fox himself explains it, “Nothing was missing, so when they stitched me up … I repaired, and I’ve really nothing wrong with me today, except the scars.” (Source: ABC)

After a time, Fox came to appreciate the great white shark and worked to protect it. “The thing that attacked me many years ago was an incredible spirit or a problem or a death or a fear or something, but now I look back and I realize that the sharks really aren’t man-eaters — they are part of our life, part of our ocean and they deserve more respect than being just thought of as ‘the best shark’s a dead shark,’ ” said Fox.

Professional surfer Bethany Hamilton talks about her passionate pursuit of surfing, the past and her future.

Dog bites shark, gets over 1.4 million hits on YouTube
The tragedy of shark fin soup
What to wear to Shark Week

40 mins ago
by Julie Sprankles