Women use high heels to feel more empowered, but how far will you go in order to feel superior? 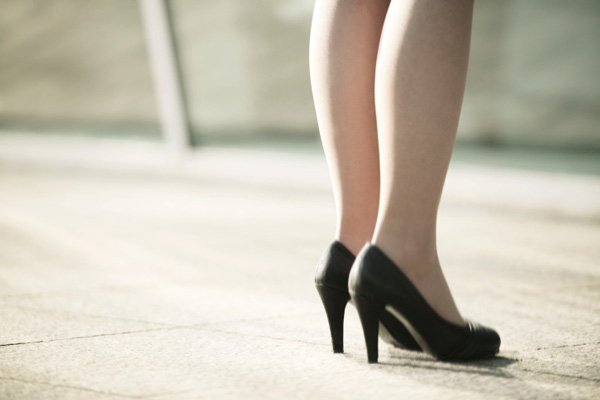 Flats
are for quitters

Women use high heels to feel more empowered, but how far will you go in order to feel superior?

Flats are for quitters

It’s not uncommon for a woman heading into an important day at work, meeting or interview to slip on a pair of her highest heels. Seeking a boost of confidence, some women feel like a towering heel is what will give them that extra push they need. While we know a stiletto may not be good for our spine, that won’t stop us.

“Would You Give Up Your Heels If They Were Causing You Physical Pain?” That’s the question that The Grindstone posed to women who use heels as a power source. In a recent New York Times article, one businesswoman working in Manhattan was quoted as saying: “Flats are for quitters. […] If a woman can’t wear heels, can she really run the country?”

In The Grindstone poll, women from all over the country were a bit less fanatical about their allegiance to high heels. Of the poll’s responders, 45 percent said they’d give up heels that caused them pain, and another 38 percent said they’d wear them only if they “had to.” Meanwhile, 16 percent agreed with the Manhattan woman, saying they’d wear heels that were killing them because “power is everything.”

High heels and work have long been the subject of debate. How high is too high of a heel for the workplace? Do your high heels make you feel more powerful or do they make others perceive you as more powerful? What’s the best way of handling the “heel juggle” — managing the flats you wear on the subway to the heels you wear in the office?

These days, something as seemingly superficial as shoes really does matter. While some people can’t decide if high heels empower or objectify, others believe that being taller gives you a leg up on the job. And it can make all the difference to your paycheck.

According to one study, tall people make more money than short people do. In the workplace, “each inch in height corresponds to $789 extra in pay each year, even when gender, weight and age are taken into account. An extra six inches, for example, results in an extra $4,734 in annual income.”

That’s a lot of money. Maybe Carrie Bradshaw was on to something.

6 Signs it’s time for a new job
Is your female boss killing your career?
How to be happily employed in a tough economy