With technology comes rules, meaning you can’t just do whatever you want where your gadgets are concerned. Whether you’re attached to your iPhone, your laptop, your tablet or all three (and then some), you should have some consideration for those around you. To help you master tech etiquette, we’ve put together a list of some of the biggest no-no’s where wielding gadgets is concerned. Take a look — and proceed with caution the next time you reach for your BlackBerry. 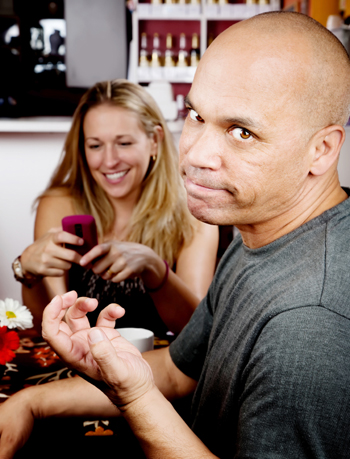 If there’s something that should be said in person but you’re having trouble working up the nerve to do it, don’t chicken out and use email instead. There are too many ways for someone to misinterpret what you’ve written, so if you want to be clear, and you have something important to say, skip technology altogether and communicate live and in person.

Do respect your neighbors

With everyone and their grandmother walking around with a cell phone, it’s inevitable that you’ll be talking in public at some point, often several times a day. But if you’re in a crowded space – a restaurant, on the bus – and you’re loudly telling the world about your latest breakup, trust us when we tell you that you’re annoying everyone around you. We’re not saying don’t take the call – just keep your voice down and respect those around you.

You may have mastered the fine art of walking and chewing gum, but walking while texting is a whole other matter. We’ve all seen those people so engrossed in the message they’re furiously typing that they trip (sending their precious phone sailing into the street) or bump into everyone they get near. If you need to send a text that can’t wait – while you’re in motion – stop and move to the side before typing.

Do have tech-free live conversations

There’s nothing worse than trying to talk to someone who keeps checking their phone. They nod, they smile, they murmur the occasional, barely audible “Mmm-hmmm,” but you know they’re more interested in their phone than in what you have to say. If you’re talking to a real person, put your phone away or train yourself not to look at it every two seconds. Stealing furtive glances at your iPhone just makes you look like you have a tic – not to mention it’s rude. When someone is talking to you, make sure they have your full attention – and they have yours.

Unless someone asks for confirmation that you received their email, try to avoid sending one word emails that say things like, “got it” or “OK!” Short, succinct emails are fine, but just make sure they say something worthwhile. Otherwise you’re just clogging the inboxes of your friends and co-workers and they probably aren’t happy about it. If someone has asked you to do something, it’s fine to send a few words letting them know that yes, you can take on that project or that you’ve taken care of whatever they requested, but if no followup is necessary, keep the one-word messages to a minimum.

When it comes to social networking, it can be so easy to just post – status updates, tweets, photos, comments – without really thinking. But it’s a good idea to think about whatever you’re planning to send out into cyberspace before you publish it. Will that status update offend someone? Will the photos you’re planning to post embarrass anyone? Take a minute to go over what you want to say or post before you do it to avoid any social networking slip-ups.

It’s common to see people talking on their cell phones while talking to someone right there in front of them. How is this possible? They simply talk – not indicating who they’re talking to – and it’s the job of everyone else to figure out who is being addressed. There’s a lot of “I wasn’t talking to you” and “Were you talking to me?” happening in that conversation and it can be tiresome. If someone comes up to you while you’re on the phone, indicate you’ll be with them in a moment. Politely end your call, then begin a new conversation. Trying to have two conversations at once is not only rude but a waste of other people’s time.

10 hrs ago
by Marshall Bright