Just when you didn’t think you could hear more about how “green” Hollywood is, we’re bringing you the Hollywood Goes Green series. Sure, we sometimes scratch our heads wondering how celebs who live in 20,000-square-foot homes, charter private jets and own 10 vacation compounds call themselves green because they drive a Prius. But as it turns out, being green means more than using less electricity and carpooling. Check out our weekly pick for the top green celebrities in Hollywood. This week, we focus on Edward Norton.

Edward Norton, Hollywood hottie and actor extraordinaire, is a two-time Academy Award nominee. But he’s more than just a bundle of talent and a cute face. Norton is also committed to the environment. 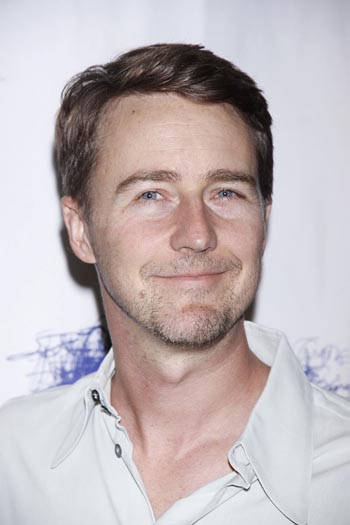 The Maasai Wilderness Conservation Trust focuses on a healthy partnership between Maasai leaders and professional conservationists that helps the Maasai people manage their environmental resources in a way that benefits them and respects the earth.

In 2009, Norton ran the New York City marathon to support the organization. He came in first among all of the celebrity runners. He’s hot, dedicated and an athlete!

To raise funds for the marathon, Norton (along with other individuals) created a website. It was so successful that they launched Crowdrise, “a unique blend of online fundraising, crowdsourcing, social networking, contests and other nice stuff.” The goal of the website is to make fundraising so much fun that everyone wants to do it.

While Crowdrise isn’t a green endeavor, it was born of Norton’s commitment to the environment.

“[People] don’t necessarily link themselves as directly to a crisis like biodiversity loss as much as they will to, say, a refugee crisis. But I think catastrophic events, such as what is happening in the Gulf [of Mexico] with the oil spill, do highlight for people that there is an enormous ramification for human well-being to a loss of biodiversity like a fishery,” Norton said. “Environmental conservation, climate change, biodiversity are very much the issues that will define [this] generation.”

As we all know, green living and green commitments don’t all have to be big. Like many people who care about the environment, Norton does smaller things to honor the earth. He also hosted the PBS special Strange Days on Planet Earth, a series on how humans affect the planet.

Do you have a favorite green celeb you’d like to see featured in our Hollywood Goes Green series? Share in the comments section!