Olivia Wilde and Olivia Munn both showed up at the San Diego premiere of Cowboys and Aliens. Who had the better red carpet look? 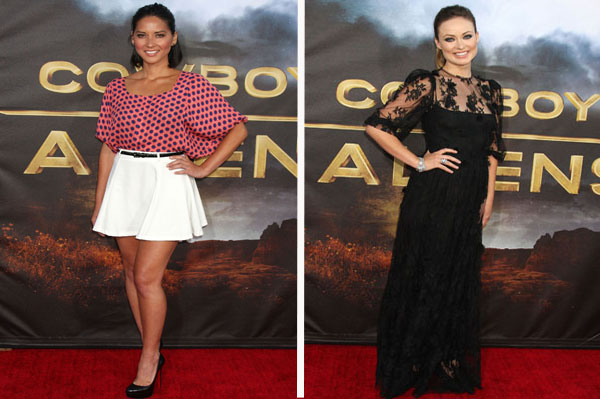 It was a battle of the Olivias — Olivia Wilde and Olivia Munn — at the premiere of Cowboys and Aliens on Saturday night at Comic-Con in San Diego. Wilde stars in the film — and Munn is known for her love of everything geek chic — so it’s only natural that she was there too. Oh, and these two were both rumored to have recent flings with Justin Timberlake. Awkward, much?

However, the two Olivias sports drastically different looks at the premiere. Which woman won our fashion face-off?

You’d think that a Comic-Con film premiere would call for a fun, breezy outfit from one of its main stars, but you’d be wrong. Wilde opted for a very harsh and dramatic dress from Dolce & Gabbana. The dress — black and lacy — made a stark contrast with her fair skin tone. Her dramatic, smokey eye makeup made the outfit all the more dramatic.

Olivia, lighten up — it’s July and you’re not at a funeral, mmmkay?

Munn went for the complete opposite look: the actress walked the red carpet wearing a a Tucker shirt, an Asos skirt, Louboutin heels and Mikimoto black pearl earrings to the red carpet premiere.

The brunette’s style was just the sort of summer outfit we expected to see — and it looks a lot more comfortable than Wilde’s severe look.

Olivia Vs. Olivia: Who won?

We have to declare Munn the winner of this fashion face off. Sure, we think Wilde is gorgeous, but this look was just a miss all around.

“There’s a little nudity in this one,” Wilde told Access Hollywood recently.

There you go, boys!

Which outfit did you like better: Olivia Munn’s casual style or Olivia Wilde’s Dolce & Gabbana?