Comic-Con International has descended upon San Diego and the San Diego Convention Center is the place to be. Find out which event highlights you don’t want to miss — both at the official Comic-Con and outside of it. There’s plenty to do in San Diego over the next four days! 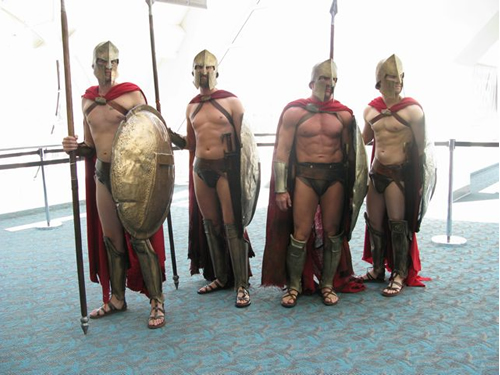 If you’re a comic book, superhero, action movie, animae, horror film or video game fan, you already know that this is the weekend for you. Comic-Con is the largest convention of its type in the United States. Last year, over 130,000 fans attended the sold-out four-day long experience at the San Diego Convention Center. Comic-Con 2011 is now underway.

On Thursday, Kristen Stewart, Robert Pattinson and Taylor Lautner will all participate in a panel discussion at Comic-Con. They’ll be chatting about the next Twilight movie, Breaking Dawn, which will be released in November.

Want to see Captain America before it hits theaters? You can watch Captain America at Comic-Con, one day ahead of its release. It will screen multiple times through the day on Thursday, with the final showing at 11:45 p.m.

Outside of the official Comic-Con

Whether you didn’t get your ticket in time and still want to be part of the action or you’re looking for some additional offsite Comic-Con fun, following are a few activities taking place outside of Comic-Con

There is no shortage of offsite parties spanning the four days of Comic-Con. From an industry night party with a surprise guest performer at Fluxx to the free San Diego Zombie Walk, there is something for everyone. Get the full list of parties at the San Diego Comic-Con party guide.

You can catch a battle scene from KÀ, the Cirque de Soleil show that runs in Las Vegas at the MGM Grand, at Petco Park on Thursday night. This offsite Comic-Con event is free and it begins at approximately 9:30 p.m.!

Comic-Concert: A night of geek rock

If you’re looking for some late night music fun, check out the Comic-Concert, hosted by ComicsOnline and The Stage. Arrive in costume for a chance to win prizes.

Comic-Con attendees who want to grab a cheap appetizer or drink can stop by one of the many Comic-Con happy hours. Check out Sign On San Diego’s long list of great happy hours during Comic-Con.

If you want to see more of downtown San Diego during Comic-Con, don’t miss the downtown Comic-Con scavenger hunt. From the website: “Search the city’s coolest rooftop lounges, hip hotels and scenic hot spots for a chance to win prizes like Best Costume, Best Creative Comicon Photo and more.” Dress up and have a blast!

Not sure what to wear to Comic-Con? We have a roundup of the best Comic-Con costumes ever. Take a look! Perhaps you’ll find some inspiration.