Apple announced a slew of upgrades for its MacBook Air computers and threw in the OS X Lion for good measure. What about the iPhone 5, though? 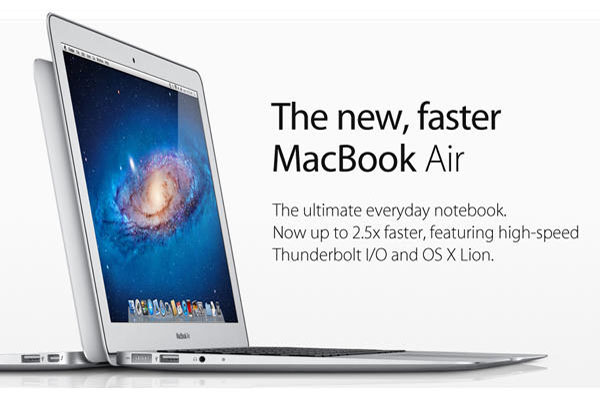 We’ve figured out by now that Apple likes to make a big splash when it comes to new product announcements. Today was no exception with the release of Lion – the new Mac operating system – and the introduction of an updated MacBook Air.

One of the biggest complaints Apple fans had about the ultra light MacBook Air is that it didn’t have the backlighting and ports that heavier MacBook Pros had. Well, that’s changed now – the new MacBook Air includes new Thunderbolt ports, backlit keyboards and the ultra-fast Intel Sandy Bridge processor.

All good things come with a price, though: Apple is discontinuing its white MacBooks now that the faster and lighter MacBook Air is out. The improved MacBook Air comes in both an 11-inch and 13-inch model and will retail starting at $999 when it hits stores on Thursday.

Forget to save your work regularly? We have that problem – and it causes many a headache. That’s not a problem anymore with the OS X Lion: it automatically saves files whenever you close a program. Also, the new operating system looks a lot more like an iPad with its Launchpad feature.

Naturally, the release has overwhelmed the Mac App store, so you might have to wait a bit if you can’t download it right away. Also, Apple Store employees will help you with download questions if you need help.

Many stock analysts are still calling Apple stock a bargain, even after the stock jumped 5 percent Tuesday with the announcement of higher-than-expected iPhone and iPad sales during the first half of 2011. The price of Apple stock topped $7.59 a share Tuesday, a huge jump from the $3.51 a share price it held a year ago.

Sounds like Apple’s what you need to invest in!

The highly anticipated iPhone 5 is still a secret, though many tech industry analysts expect the iPhone to go on sale in September since Apple is advertising for temporary employees to staff an “exciting project from August 16 to October 29.”

So, what will the new iPhone 5 include? Many expect it’ll have a faster processor like the Samsung Galaxy II, along with an 8-megapixel camera, run on iOS5 and have a polysilicon HD display.

Rumors are also circulating that a cheaper version of the iPhone 5 is in the works too for everyone that wants an iPhone without all the crazy bells and whistles they don’t use anyway.

It’s an exciting day to be an Apple fan!

What are you most excited for: The new MacBook Air, Lion OSX or the iPhone 5?

16 hrs ago
by Kenzie Mastroe