Emma Stone and Mila Kunis both went red hot at the Monday night premiere of Friends With Benefits in New York City. Who wore their red better? 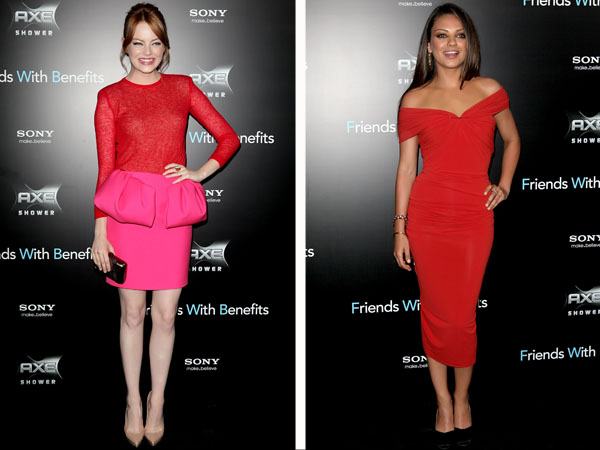 Sure, it was Mila Kunis’moment to shine at the Monday night premiere of Friends With Benefits at the Ziegfeld Theatre in New York City, but co-star Emma Stone turned more than a few heads herself.

Kunis, 27, struck a dramatic pose in a fitted red Lanvin dress with black heels. The dress really set off her golden skin tone, striking eyes and shiny strands. However, we absolutely cannot take our eyes off Stone in her pink and red Giambattista Valli from the designer’s Fall 2011 collection. It just works for her body and skin tone.

Mila Kunis: Not only a pretty face

Kunis might ignite a fire on the red carpet, but she told GQ that she thinks the entertainment industry puts too much emphasis on looks.

“If you’re an attractive female in this industry, people just take you as that: attractive. People aren’t getting the opportunity to move beyond being attractive. It’s not only with comedy. It could be with drama or action or whatever. People are distracted by looks. It happens. I’m not saying it happened to me, but it happens,” Kunis said in the August 2011 issue.

We probably wouldn’t complain if we looked like her.

One of the reasons we love Stone — besides her movies — is that she doesn’t take herself too seriously.

“You’re a human being, you live once and life is wonderful, so eat the damn red velvet cupcake,” Stone told Glamour in her May 2011 interview.

“I sucked my thumb until I was 11, so I had this expander in. I was a good-looking kid. I never felt, like, dorky. I was just like, ‘Yup, these are my braces. I’ve had them forever,” she added in her June 2011 interview in ELLE.

Oh, and she plays FarmVille too — at least we’re not the only addicts.

Emma Vs. Mila: Who wins?

Our fashion face-off award for the Friends With Benefits premiere has to go to Stone. We know it’s really Kunis’premiere, but Stone just did it for us.

Don’t worry, Mila: We fully expect you to show Emma up at the premiere of Crazy, Stupid, Love. Don’t disappoint us!