After seeing the film Horrible Bosses
(now playing) — and watching the characters played by Jennifer Aniston, Colin Farrell and Kevin Spacey display some seriously unsavory boss behavior, we were inspired to create our own bad boss list. Read on for our take on four types of bosses you definitely don’t want to get stuck with. 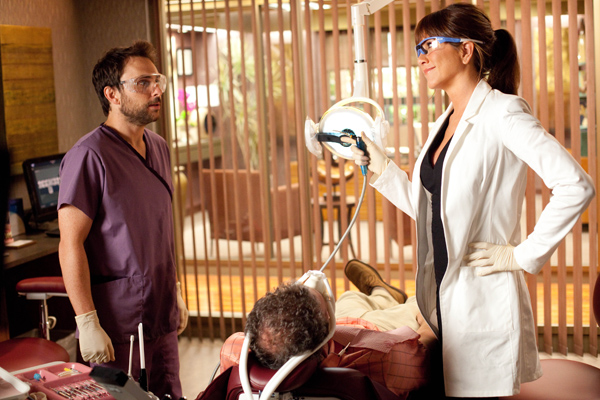 If you’re the type of person who thrives on praise and pats on the back, you won’t feel very good about yourself working for the never-satisfied boss. As the name suggests, he is never satisfied – no matter how hard you work, how many extra projects you take on or the number of new clients you bring on board. He will simply shrug (if you’re lucky) – or more likely, he’ll find fault in what you’ve just done. Even if the report is meticulous or the presentation was successful, this is one boss who can’t just say “good job.” He needs to feel in charge and ahead of the curve, so he finds fault in even the best and brightest work. If there is no fault to find, he’ll just give you more work or add more requests to a project you thought was coming to an end.

Like the never-satisfied boss, the angry boss is perpetually on the warpath. This is a boss who never smiles, never cracks a joke and definitely never laughs. Something is always wrong, and when things go wrong, you’d better get out of the way. The angry boss comes into the office early and leaves late, so you likely can’t escape her. She hates being interrupted and she won’t stand for anyone being late to a meeting, who doesn’t do their job properly or who doesn’t give her what she wants immediately after she’s requested it. She is, in a word, scary. You don’t want to cross her, and heaven forbid you come to a meeting unprepared. She’ll know it and she’ll single you out. Her glare can melt ice and anyone who tries to talk to her before she’s had her coffee will pay dearly.

The two-faced boss is one of the most frustrating to deal with because you never know what (or who) you’re going to get. One day he’s everyone’s best friend – ordering pizza for the office, suggesting after-work beers and telling everyone what a great job they’re doing. The next day he turns into a deadly combination of angry boss and never-satisfied boss. Basically, it’s like dealing with a corporate, suit-wearing version of Dr. Jekyll and Mr. Hyde – not fun for anyone and also a little frightening. No one knows why he seems to have two personalities; they just know to always be on their toes for fear of getting caught in an elevator – alone – with the boss when he’s turned from good to evil.

The boss who plays favorites

Working for a boss who plays favorites is tough. Usually it means doing just as good of a job – or an even better job – than the people who are at the top of the office food-chain, only to be shut out of all the good projects and never receive any praise. It isn’t fair, but it does happen. Maybe the people your boss favors did a good job of sucking up, maybe they’re just lucky – either way it’s going to be hard to stay motivated knowing that no matter what you do, you’ll always be second-best. You can try to squeeze your way into the top tier, but it will be difficult getting past the people who are already there, because they don’t want to share the spotlight.