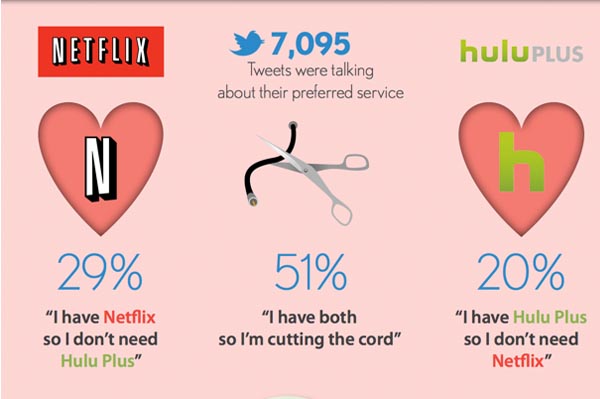 Rumor has it that Hulu Plus could be for sale and that Google and Yahoo are both showing interest. Of course, all of this talk of Hulu Plus potentially being for sale has people discussing streaming video services. The latest buzz: What’s better? Hulu Plus or Netflix?

Don’t worry — while there’s not an app for that, there’s an infographic to show you which company comes out on top. Mashwork followed the buzz on Twitter and found that while users did have a preference for one streaming video service provider over the other, there’s only one big loser. And that’s cable.

Users who preferred Netflix over Hulu Plus indicated that their top reasons were as follows:

(Mashwork noted that most of these opinions were collected before Hulu Plus dropped their price. Netflix recently announced a price hike that also may change user preference.)

Users who preferred Hulu Plus over Netflix indicated that their top reasons were as follows:

Another interesting finding was the gender breakdown. While Netflix users were nearly balanced in gender (52% males versus 48% female), Hulu Plus users were mostly male (76% male versus 24% female).

Also noteworthy: On June 22, the Hulu Plus Android App was released. Twitter conversation jumped 4,180% — and 91% of that talk was about cutting cable service.

While this Hulu Plus versus Netflix Twitter talk “study” isn’t exactly scientific in nature, social media is where it’s at these days. It will be interesting to see what happens with cable in the future, as well as whether Hulu Plus will be sold.

Do you have a preference for Hulu Plus or Netflix? What about cable? Share your preference in the comment section!