Blake Lantern looked gorgeous at the L.A. premiere of Green Lantern. Was her dress the right pick, though? 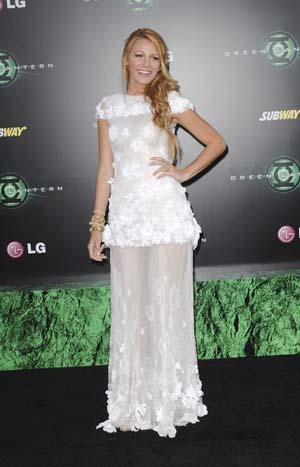 Blake Lively turned out heads Wednesday night when she stepped out at Grauman’s Chinese Theatre for the Los Angeles premiere of Green Lantern, her new film with one of the sexiest men alive, Ryan Reynolds.

We first noticed that Lively went back to her trademark blond hair after a six-week stint with the color red. Then, it was all about her dress. The tall and gorgeous actress wore a white Chanel Haute Couture dress accessorized with a ton of bracelets, a sexy braid and an embellished barrette.

We can’t decide if we love the dress or not. Her flawless figure looks amazing in Chanel — as always — but, we’re not sold on the dress’ added flower details. Plus, the see-through skirt is entering some dangerous territory there.

We still have to say that we prefer Lively’s 2011 MET Gala gown over this Chanel creation. It just hugged her body in all of the right places and made her look like the mega-star she’s becoming.

Check out our exclusive chat with Blake Lively about Green Lantern!>>>

Regardless of what we think of the dress, we do love Lively’s fresh take on pre-event noshing.

“My diet of choice before events is a chicken potpie from Tea & Sympathy, because they never have enough food at these things,” Lively said during her July 2011 interview with Glamour.

And despite her flawless looks, she’s not all that high-maintenance.

“I like it to be easy. I don’t feel like I have to do so much with hair and makeup, because I’m the mannequin for these beautiful clothes, so I never want to do anything too distracting,” she told the magazine.

“Most of the time, I put my hair in a ballerina bun, and I take it down and it’s wavy, and then I leave. I feel shy when people are fussing on me.”

Oh, Blake: we love you — except for dating our future husband, Leonardo DiCaprio, and all. We’ll get over it though, really.