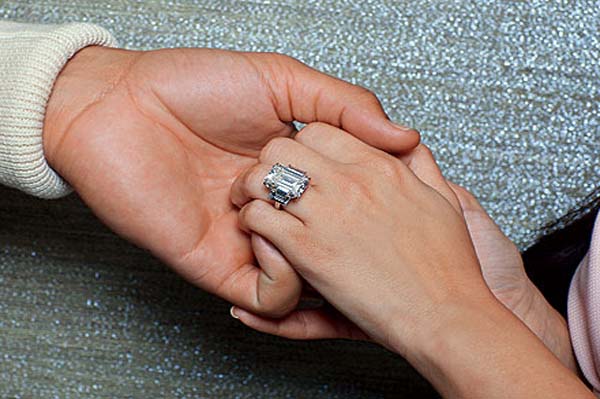 The lowdown on her big ring 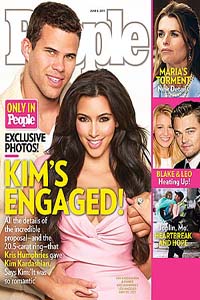 Our jaws dropped when Kim Kardashian revealed to People that the huge 20.5-carat engagement ring her newly-minted fiancé gave her cost over $2 million.

“In high school I went to Macy’s and bought this fake ring, my ‘perfect’ ring, and this is almost the exact same,” Kardashian told People.

“It’s the most beautiful thing I have ever seen,” says Kardashian of her sparkler. “It’s perfect.”

We’re questioning whether or not Humphries really has the kind of cash needed to buy such an expensive ring, but one thing’s for sure: it’s the biggest (but not most expensive) celebrity engagement ring around!

How do others compare?

Princess Diana first received this 18-carat oval-cut sapphire ring when Prince Charles popped the question back in 1980. Prince William then passed it down to his new bride, Kate Middleton, when he proposed in November 2010. We hope the tradition continues with their future children!

New mom Mariah Carey received a huge rock from hubby Nick Cannon when he proposed in 2008 — 18 carats and worth $2.5 million! Nothing but the best for Mimi. Wonder how he topped that when the couple renewed their vows last month?

Beyonce is all about glitz and glamour — and the engagement ring she received from now-husband Jay Z is no exception. Lorraine Schwartz designed both Kardashian and Beyonce’s engagement ring — and B’s emerald-cut stunner weighs in at 28 carats and cost a staggering $5 million.

What do you think of Kim Kardashian’s engagement ring?

Justin Bieber’s Someday perfume: Would you wear it?
Oprah’s stylists dish on her contributions to fashion
Your fave celebrity moms: Snag their style