Justin Bieber is now a perfumier! The pint-sized singer just released a new fragrance for all of his teen girl fans. 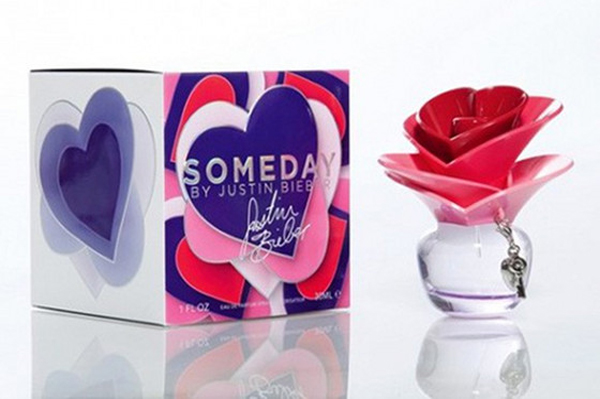 Beiber gives back to the girls who love him

“I wanted to do a fragrance for women because I wanted to be smelling the girls’ necks.”

Creepy or cute? It’s up to you: that’s what Justin Bieber told Ryan Seacrest Monday about his newest beauty fragrance.

“Let’s be real: The way a girl smells is very important to a guy,” the Biebs told Women’s Wear Daily. “I have such a deep connection to my fans, so creating a fragrance that I personally love is another way I can bring them close to my world.”

Part of the proceeds from the $55 Someday fragrance will go to the Make A Wish Foundation. Lower-priced body mists and body lotions are also part of the line.

“I want to tell the girls what I like and what I think is going to be hot and what’s attractive to me. So I wanted to make a fragrance that I think will be appealing and make me want to chase the girl that I smell,” he told WWD.

“I think it’s better than doing it for other guys at this point. I’m looking for a fragrance I’m going to like on a woman.”

Someday is Bieber’s third product for girls — he’s released both a unisex fragrance and a Nicole by OPI nail polish collection at Wal-Mart.

Check out the commercial for Justin Bieber’s Someday

Does the bottle look familiar to you? It’s because it’s basically the same bottle as the Marc Jacobs’ Lola fragrance. He’s getting a lot of slack for the similarites — though we really doubt Jacobs’ target market is the same as Bieber’s.

Would you try Justin Bieber’s Someday? Comment on the scent below.

20 mins ago
by Alicia Kort

21 mins ago
by Alicia Kort

27 mins ago
by Alicia Kort