Soon to give up her throne as the queen of daytime TV, Oprah will be well missed for her groundbreaking talk show and her ever-evolving style. Even though her fashion sense both on the off the show has transformed over the years, she always remains true to her unique personality. Here we share Oprah’s most noteworthy and important fashion moments from her 25 years in the spotlight. 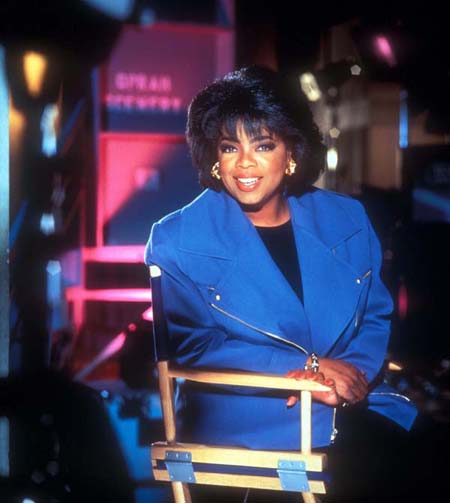 When The Oprah Winfrey Show began its long run in 1986, Oprah graced the stage in jewel colored suits with wide collars and massive earrings. It takes a certain kind of woman — with a certain kind of personality — to pull off the look seen in this 1984 PR shot, and Oprah managed to do so with flying colors (pun intended). Audiences couldn’t take their eyes off this prominent newcomer, and neither could the fashion police, but there is no question that she managed to charm the pants off everyone.

Regal on the red carpet 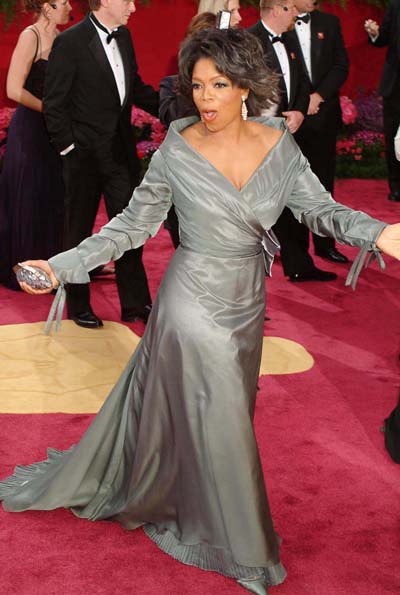 At the 76th Academy Awards in 2004, the talk show queen showed the world that journalists can be celebrities too. Wearing long sleeves and cuffs on a silver floor length gown is risky enough, but Oprah topped it all off with a ruffled train and artistically draped framing collar. With only diamond earrings and her successful glow to compliment the look, Oprah took the crown that night. The attention the dress received prompted a flurry of similar styles including the one she wore to the 2007 CFDA Fashion Awards. 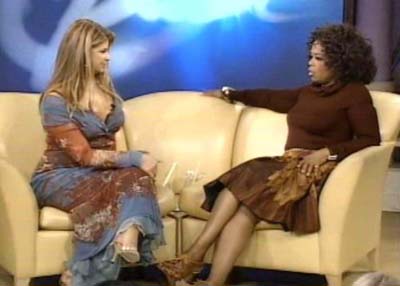 Oprah, like any woman worth her salt, knows what looks good on her body. Despite battling with her weight, there are certain looks that she goes to over and over again. The full skirts ending at the knee and cinching at the waist define her curves appropriately for daytime television. The look seen in this 2005 episode is on the dressier side without being too formal or feeling too vintage. As the fashion runways show today, this look is still extremely popular. 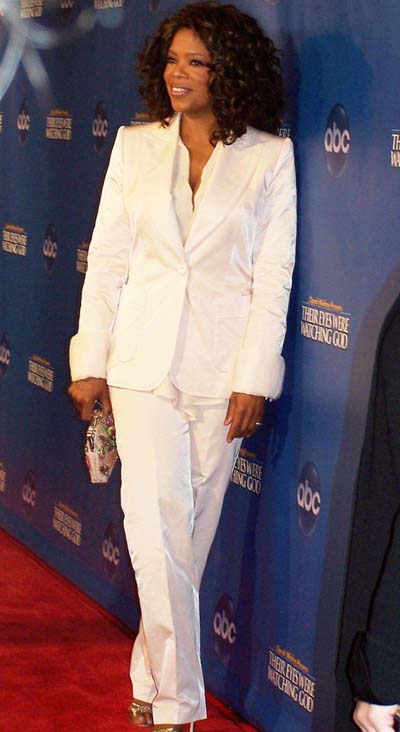 It seems like every female celebrity tries to stand out with a little menswear influence on the red carpet, and not all of them do so well. Oprah however, is one of the few who manage to pull it off — in all white! Celebrating her support of African American female writers and actresses at the 2005 premiere of Oprah Winfrey Presents: Their Eyes Were Watching God, Oprah smiled for the camera looking cool and collected in her monotone ensemble and metallic accessories. 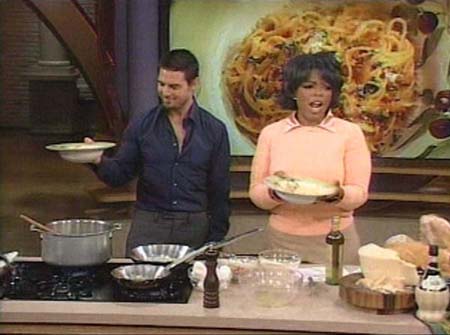 The ’90s began Oprah’s departure into the realm of casual wear. As seen in this 1990 episode, she always choose coordinating colors, and her relaxed outfits allowed for her to appear more relatable fans and celebrities alike. She began to look less like an anchorwoman and more like the hip mom or cool coworker we all wanted to be friends with. 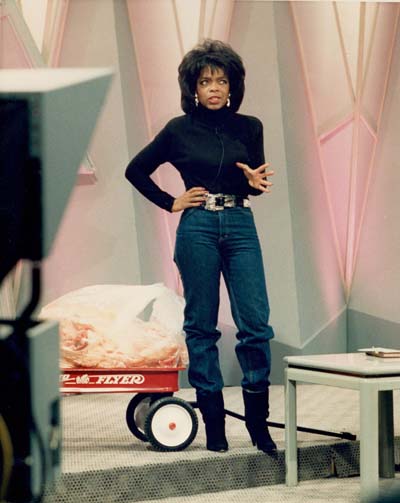 In one 1988 episode, Oprah shunned suits to show how much weight she lost in jeans and a turtleneck. From the black high-heeled boots and giant silver belt to the red wagon full of fat symbolizing the amount of weight she lost, the accessories were the most memorable part of the outfit. Being 67 pounds thinner didn’t hamper her inner or outer strength in the slightest. After all, it takes a lot of both to pull off those door knocker earrings. 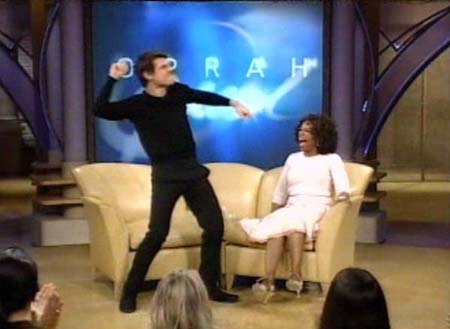 Who can forgot the Tom Cruise jumping on the couch in this 2005 episode? Arguably the most memorable show in Oprah’s history, the nation was shocked by what looked like a short journey into the realm of insanity. While Cruise was wearing all black, the host herself was covered from head to toe in pale pink. Oprah may not have foreseen the events of that day, but she managed to look undeniably polished and ladylike—a soothing contrast to what was going on at the other side of the couch. 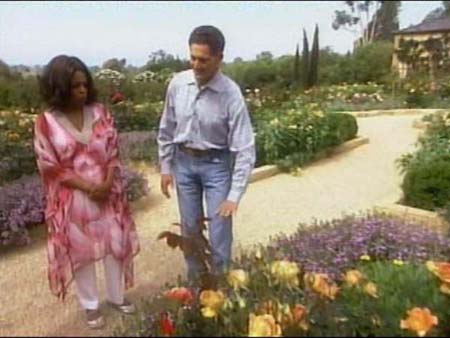 In a rare glimpse into the star’s home in 2006, fans got to take a peek into Oprah’s rose garden and her at-home style. The billowing caftan in shades of pink paired with white jeans and flats didn’t seem like something she’d wear on the show. The relaxed, comfortable Oprah was just as bright and eye-catching as her television personality, but everyone breathed a sigh of relief when they realized the celebrity had a soft side too. 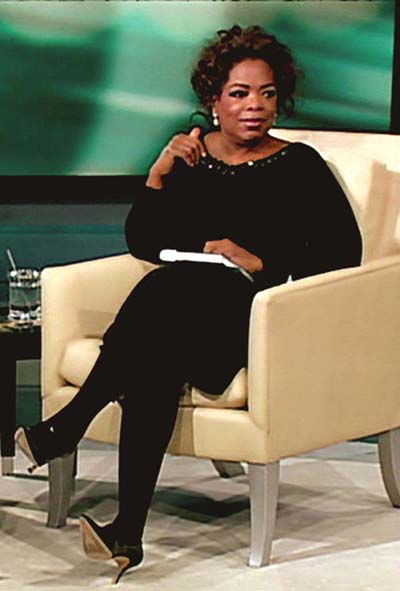 The last decade of her show marked a new trend in Oprah fashion—the dress. She had worn dresses on the show before, but she had never worn them with such repetition and polish, as seen here in a 2007 episode. The maturing host displayed her confidence at having past the twentieth anniversary of the show in 2006 with more muted colors and sophisticated cuts. Her voice spoke louder than her clothes, and the results were as brilliant as the jewel tones of the eighties.

Stepping out in style 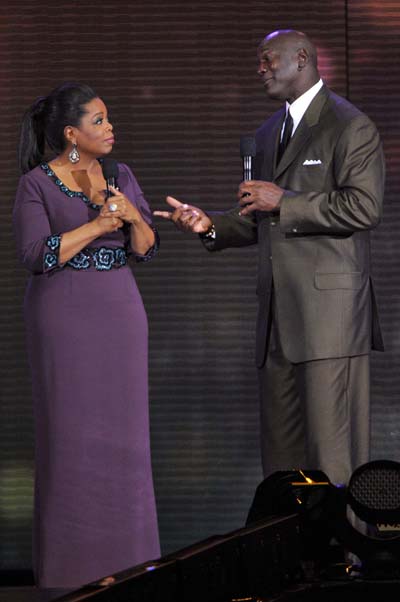 While many viewers wonder what’s next for Oprah, celebrities came in droves to the “Surprise Oprah! A Farewell Spectacular” event in Chicago honoring the seminal talk show host. Her outfit for this important night seemed to mark many of the fashion trends she adopted over her twenty-five year run on television. We see the color, the long gown with sleeves, the cinched waist, the emphasis of curves and even the big, flashy earrings. It’s all there and her nod to her fashionable past makes this dress the marker of the end of an era.