One of the most important summer accessories you can have is a good book. Toss a great read in your tote and you’re ready for a relaxing day at the beach. We’re getting excited for the launch of Spoiled, the first novel from Heather Cocks and Jessica Morgan — the stylish brains behind popular fashion blog, Go Fug Yourself. We got the inside scoop on this fun, fresh and fabulous debut novel from the style-savvy girls themselves.

Q&A with Heather Cocks and Jessica Morgan of Go Fug Yourself fame: 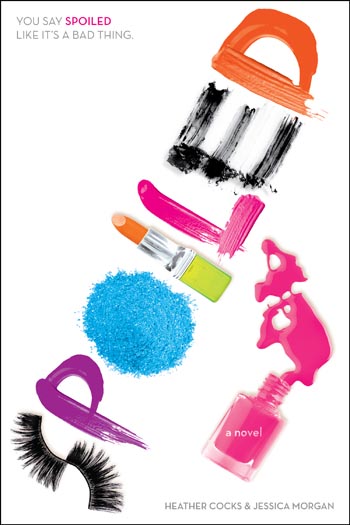 SheKnows: What was the best part about writing Spoiled together?

Jessica: It was really fun. I think my favorite part was getting to see what Heather wrote. We divvied up the chapters after breaking out the story in an outline together, so I knew generally where she was taking the stories, but I was always really excited to see how she got there.

Heather: Same — it was like a series of little surprises, and it was cool because it’s easy to get into a bit of a rut, in terms of where you set scenes or how you begin them or whatever, so it was a treat to see what she picked. But I also enjoy having someone to lean on — the collaborative process of solving a problem when we’re stuck is really satisfying. It’s so fun to dig in and chew on the details and bounce ideas off each other.

SheKnows: How did your LA life and regular celeb-watching help shape Spoiled?

Jessica: Oh, I think it helped a lot. We knew we wanted to set the book in LA, and I think living here (and I grew up here) helped us to make the city as much of a character as any of the actual people in it.

Heather: Living here, you’re just sort of among it more, you’re immersed in it more, and I think therefore we absorb a lot more of it than your average person.

“There’s an embarrassingly large amount of my memory bank that’s taken up by remembering the names of celebrity kids, so that when I’m leaving Gymboree with my kids I can go, “Oh, hey, those are Gwen Stefani’s boys,” and know that I’m right,” says Heather.

SheKnows: Current top 5 best-dressed celebs and why they’re on your list?

Jessica: I love this idea! The list changes all the time. But I think for me, it’s:

Heather: I would pick a lot of those same people, but let me see if I can dredge up five other names:

SheKnows: Who do you think should take a what NOT to wear class?

Jessica: NO ONE! Or we wouldn’t have any material!

Heather: I can’t put it any better than that. We always joke that we don’t actually want anyone to listen to what we’re saying.

Heather: Make sure it’s not see-through.