In this weeks’ Life & Style, Mariah Carey shares the first photos of her twins’ new elegant nursery. Keep reading to learn about the inspiration for the nursery and for a sneak peak of the beautiful design. 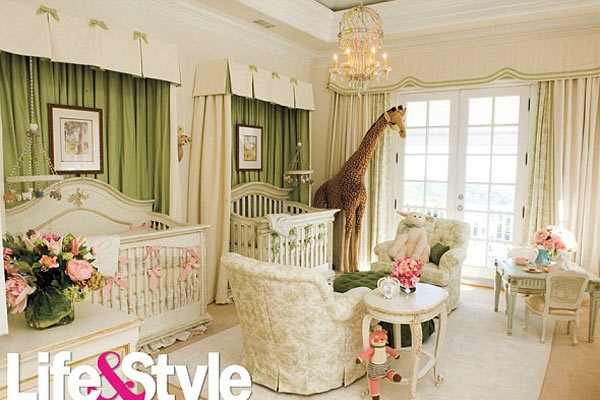 Looking for ideas for a high class nursery? Look no further than Mariah Carey and Nick Cannon, who worked with professionals to whip up not one but two elegant nurseries for their twins. “I wanted to create a beautiful, tranquil, cozy environment for the babies,” Mariah told Life & Style.

UPDATE: Mariah Carey gave birth to twins! Get all the details >>

Mariah and Nick are expecting twins, but they also have two residences, so they designed two nurseries — one in their Bel Air, California, home and another in their New York City apartment. They worked with well-known designer Mario Buatta on the New York City nursery and Gail Sedigh of AFK Furniture on their Bel Air nursery.

Not a fan of the traditional pink and blue theme for boy/girl twins, Mariah and Nick instead chose pink and green for their soon-to-be babies’ crib bedding. Additionally, the couple wanted to honor the fact that even though their babies are twins, they are still individuals. “Everything matches, but pieces are individualized to celebrate the twins as separate entities,” Mariah Carey explained to Life and Style.

If money is an object, check out Baby nursery design on a budget for wallet-friendly ideas>>

Crib mobiles are so yesterday

Taking visual stimulation to a whole new level, the twins’ nursery has a customized ceiling that Life & Style refers to as star-speckled cloud scape. As Mariah told the magazine, “The ceiling has orangey-pink clouds in a blue sky with golden stars twinkling. It’s based on two songs I wrote that are fan favorites: ‘Underneath the Stars’ and ‘Close My Eyes.'”

Mariah spends a lot of time in the nursery, gazing up at the ceiling and taking it all in — something that many expectant moms can relate to, even if on a smaller scale. Of the ceiling, she said, “To me, it symbolizes wanting my children to dream as big as possible and to let their imaginations be unbridled.”

The twins’ nursery includes attention grabbing and elegant off-white furniture, green accent pieces, a green and pink theme for the bedding and meaningful personal touches throughout. A large giraffe — obviously not life-sized, but not necessarily tot-sized — stands in the corner of the massive room. Mariah included butterflies, her favorite insect, and stuffed lambs, likely because that is what she calls her fans.

What do you think about Mariah Carey and Nick Cannon’s nursery for their twins? What would you do the same or differently if you had similar money to spend on your baby’s nursery – reportedly over $100,000?