Kim Kardashian’s gorgeous face graces the cover of this month’s international editions of Cosmopolitan. Why is she upset over the cover? 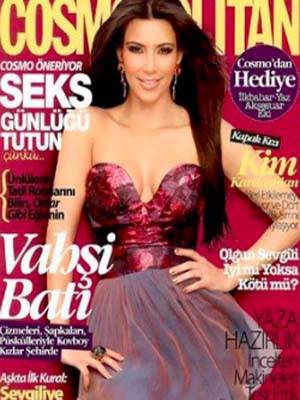 Kim Kardashian graces countless magazine covers, but her appearance on the cover of this month’s Cosmopolitan Turkey left the reality star heartbroken – and it’s not because of the photograph.

Kardashian is upset because April marks Genocide Remembrance Day, a holiday commemorating the murders of 1.5 million Armenian civilians in Turkey from 1915 to 1919. Kardashian is Armenian.

“I just found out today that I am on the cover of Cosmopolitan Magazine in Turkey this month. Cosmopolitan Magazine has a number of international editions all around the world that run in various territories, and when I did this shoot for the international covers I had no idea that Turkey was planning to run my story on their cover THIS month, considering Genocide Remembrance Day is this month,” Kardashian wrote on her website.

“My Armenian heritage means a lot to me and I’ve been brought up to be incredibly proud of my family’s background and culture so as an Armenian-American woman it is a huge honor for me to be on the first ever Armenian Cosmopolitan cover.”

A source says Cosmopolitan is deeply embarrassed by the mistake and that no ill will was intended. However, that’s not enough for the Armenian National Committee.

“It’s disrespectful to Kim Kardashian and to all Armenians for the publishers of Cosmopolitan to use her image, without her permission, on the month we mark Turkey’s genocide against the Armenian people,” said Aram Hamparian, executive director of the ANC.

“Instead of trying to turn a profit in Turkey by callously featuring a cover photo of a descendant of Armenian Genocide survivors in its April issue, Cosmopolitan should find creative ways to educate its readers about the Turkish government’s shameful effort to cover up this atrocity.”

Kardashian is trying to silence the controversy on her website.

“I have an amazing relationship with Cosmopolitan Magazine. World-over, Cosmo is known as a fun and inspiring magazine for women of all races, shapes, sizes, regardless of their political beliefs and I really hope that if I can bring awareness to the issue, then this in an accomplishment,” she wrote.

What do you think: Honest mistake or serious faux paus for Cosmo?

Read on for more celeb style

Top 6 Iconic pregnant celeb magazine covers
Reese Witherspoon wedding dress: All the details!
Gwen Stefani: From No Doubt to the cover of ELLE