When your usual repertoire of playground games just doesn’t do the trick, let your creativity take over. Playing these seven creative playground games, your kids are sure to stay active and entertained for hours. 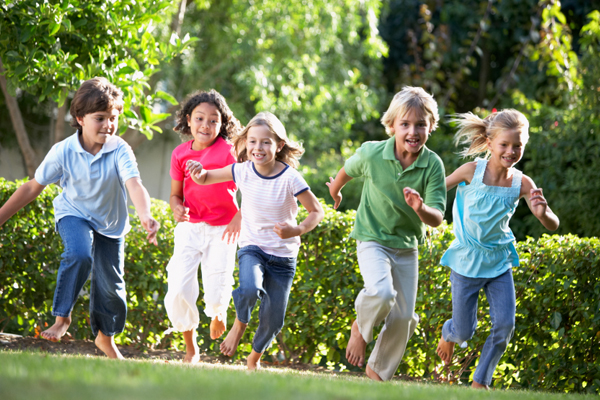 This game is all about corralling your little chickadees in a fun and fast version of tag. Designate two points approximately 25 to 35 feet apart as “safe spots.” All of the chicks start at one of the two safe spots, and one hen starts between the two points. When the hen calls for her chicks to come home, all of the chicks try to run from one safe spot to the other. Then, the hen tries to catch her chicks, and any who are caught must join the hen in the center for the next round. The last chick standing becomes the hen for the next game.

Set up four objects in a baseball diamond configuration. Split your kids into two separate teams, lining both teams up at home base. When you say “go,” the first player from each team begins walking heel to toe around the bases in opposite directions as quickly as possible. Wherever the two players meet, they face off with a quick game of rock-paper-scissors. The winning player continues walking around the bases, and the losing player runs home as quickly as possible. When the losing player reaches home, the next player on his team may start walking the bases to head off the progressing player. This continues until one team has made it all the way around the bases a set number of times.

If you’re looking for a fun outdoor game for two kids to play, set up two bases about 40 feet apart for a quick game of grab and tag. Have the kids each start on a base and place a ball between them in the grass or sand. When you say “go,” each player runs toward the ball, grabbing it and running back to his own base, or chasing the player with the ball, trying to tag him before he makes it home. The player who successfully makes it home or tags his opponent wins a point. The first player to five wins the game.

Split kids into groups of two or three to play a fast game of competitive leap frog. Designate a starting line and a finish line. When you say “go,” the teams of leap froggers take off across the field, each player hopping over his teammates and immediately crouching down to be hopped over — no extra steps! The first team to cross the finish line wins the race.

Jeep safari plays like a loose game of outdoor musical chairs, so if you have eight kids playing, you’ll need seven “Jeeps.” You can use rocks, playground equipment or other playground toys in this capacity. Set them up around the playground and tell the kids they’re on a safari. They have to keep walking, jumping and running around the playground, but when you say, “A lion’s on the loose!” they have to get to a Jeep as quickly as possible. The player who doesn’t make it to a Jeep on time has to sit out, and another Jeep is removed from the game. The game continues until only one child is left.

56 mins ago
by Olivia Harvey