James Franco says that social media is on the way out. Is he right or just blowing smoke? 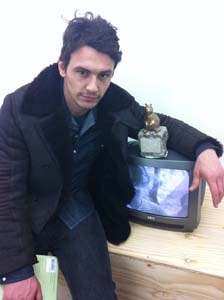 James Franco insists that social media is “dead.” He made that sweeping generalization during an interview with Policito.

“Social media is over. Still up there. Going down. You heard it here first,” Franco said. How would Franco know? Well, he’s apparently the expert at everything since he has like eight million degrees now.

Maybe Franco is just a little upset that he’s getting criticized for his Oscar hosting performance and comments about comedian Bruce Villanch? It also looks like he either disabled his Twitter profile or set it to “private.”

Or maybe this is just another one of Franco’s performance art installation/social commentary that he loves so much.

Do you think social media is dead, or is Franco just being negative?

39 mins ago
by Taylor Jeffries

1 hr ago
by Summer Cartwright