Always entertaining to follow because she wears such kooky stuff, Nicki Minaj is quickly making Lady Gaga look dowdy with her over the top outfits and crazy with a capital ‘C’ hair. 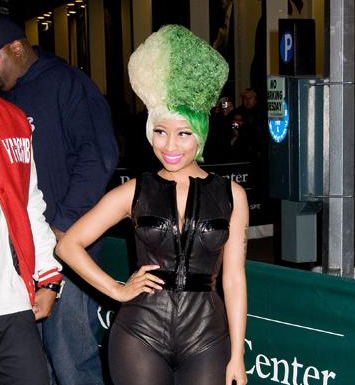 Keeping with the spirit of the evening, Tuesday night Nicki Minaj attended the Runway To Green charity event at Christie’s, as Vogue‘s special guest performer.

Apparently, editor-in-chief Anna Wintour was the one who invited her. The charity raised more than $1.2 million in under an hour by live auction alone.

But those weren’t even the BIG lots. There were three big celeb packages on the block — a flight and lunch with Harrison Ford on one of his private aircrafts; the Chanel package, which included a meet-and-greet with Karl Lagerfeld himself; and a day hanging out with President William J. Clinton, which ended up going for $100,000.

On her way to the fundraiser her Nicki tweeted:

“Dear Barbz, who knew wen I gave anna wintour a s/o in “muny” she’d b calling me 2 perform @ a vogue charity event. Lmao. Headed there now.