Even in its early days as an Old West gold-mining town, Denver had a strong cultural presence, with a local theater holding performances of Macbeth long before the city had even a school or a hospital. Today, Denver collects and distributes more public money for the arts than any other city in the United States. Here are some of our favorite spots to experience art in Denver. 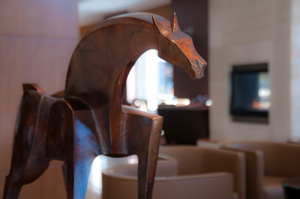 In October, the Four Seasons Hotel Denver opened in the heart of the city’s theater and arts center. The hotel showcases nearly 1,200 works by local artists, and we love the way the vibrant pieces look against the property’s sleek polished wood and stone, a design palette that reflects Colorado’s landscape. The public spaces of the hotel act as a contemporary art gallery, so browse the pieces before dinner at EDGE Restaurant and Bar, one of the hottest new spots in town.

A member of the Historic Artists’ Homes and Studios, Kirkland Museum of Fine & Decorative Art has a nationally recognized display of international decorative art from the last half of the 19th century through the first three-quarters of the 20th. You’ll find more than 3,300 works encompassing Arts & Crafts, Art Nouveau, Glasgow Style, Art Deco, modern and pop art movements, and more. While the focus is on Colorado art, there’s also a good selection of regional pieces. In all, more than 700 works by approximately 170 artists are on display at any given time.

The Children’s Museum of Denver

The Children’s Museum of Denver has been a major influence in the art education of Denver kids, from newborns to 8-year-olds, since 1973. Hosting more than 293,000 people per year, the museum focuses on rich play experiences with a dynamic learning environment. Exhibits, called “Playscapes,” are hands-on and include Alphabet Soup, a magnetic wall where your kids can practice their ABCs; Bubbles, for soapy science fun; Ready, Vet, Go! for learning about animal care, and more. There’s also a variety of day classes and programs. 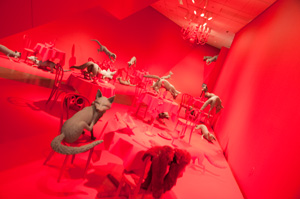 Locals will tell you that no two trips to the Denver Art Museum are ever the same — you can see something new every time you visit; with two buildings and 11 floors of exhibits, we’d have to agree. The first and second floors of both buildings feature the museum’s ever-evolving temporary exhibitions, plus robust Western American and American Indian collections. Other exhibits highlight everything from Asian and Spanish Colonial art to photography, textiles, and design exhibitions. Visit before the fall to see “Western Horizons: Landscapes from the Contemporary Realism Collection.”

Just north of downtown Denver is the River North Art District (RiNo), with a heavy concentration of creative businesses like architects, art galleries, designers, furniture makers, illustrators, photographers and sculptors. An array of studio spaces also dots the newly christened district, which is bounded by Interstate 25 to the west and Arapahoe Street to the east. Must-see spots include the galleries of Wazee Union and THE LOT @ RiNo, among others.

Denver Center for the Performing Arts

More than 750,000 people flock to The Denver Center for the Performing Arts every year for its mix of Broadway shows, other professional theater, acting instruction and overall dazzling venues. The not-for-profit center also includes the Denver Center Theatre Company, a Tony Award-winning professional resident theater; Denver Center Attractions, a presenter of blockbuster Broadway musicals and cabaret; and the National Theatre Conservatory, a congressionally chartered master of fine arts program. Current and upcoming shows include Superior Donuts, 9 to 5, and Les Misérables. 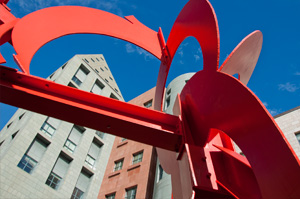 In 1988, Mayor Federico Peña established the Denver Public Art Program under an executive order enacted into ordinance by Mayor Wellington E. Webb. The program directs 1 percent of any capital improvement project of more than $1 million undertaken by the City of Denver be set aside for the inclusion of art in the design and construction of these projects. As a result, more than 150 public art works have been installed across the city, many in downtown. Two of the most recognizable pieces are right outside of the Denver Art Museum: Lao Tzu by Mark di Suvero, and Big Sweep by Coosje van Bruggen and Claes Oldenberg. Other popular works include I See What You Mean by Lawrence Argent, a statue of a giant blue bear peering into the Colorado Convention Center, and The Yearling by Donald Lipski outside the Denver Public Library.

More things to do and see in Denver

Exercise in Denver
Dining in Denver
Family activities in Denver