Things are heating up for Red Riding Hood star Amanda Seyfried. This month, she graces the March cover of Elle magazine and talks shop about big bad boys.

The blonde beauty looks totally stunning on the cover of this month’s Elle. Amanda is certain to make a lot of fans huff and puff in that outfit. 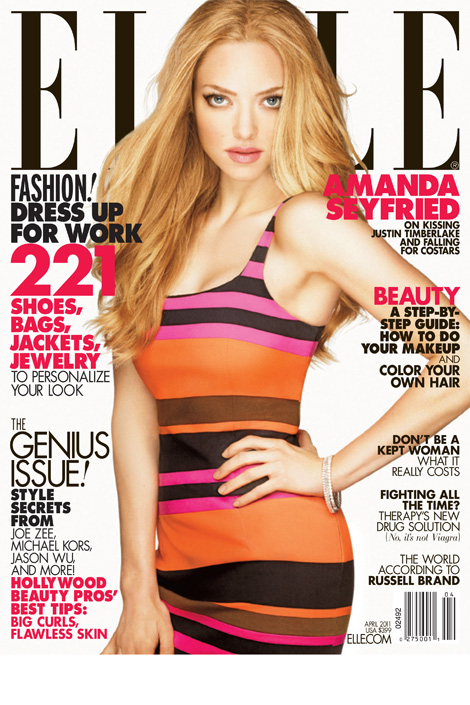 Most people can’t get away with horizontal stripes, but Seyfried’s slim physique allows for her to pretty much wear what she wants.

Along with her high fashion photo shoot, the rising Red Riding Hood star had a few things to say to Elle about Hollywood and heartache.

If you can believe, even Amanda was once told she needed to get Botox (she’s now only 25!)

“I was like, Damn you! But we’re in Hollywood. I’m on a huge screen. With these new digital cameras, you can see the peach fuzz on my face.”

And, like so many young stars, she has a habit of falling hard for her leading men, too.

“[It is] one of the easiest things in the world. You’re both open. You’re put in a situation where you have to make out with each other. It’s easy for things to get carried away.”

Seyfried especially fell for her Mama Mia costar Dominic Cooper, whom she thought was breaking up with his longtime girlfriend to be with her.

“I was just kind of foolishly thinking that the two of them were done and Dom and I were involved. But we weren’t really as involved as I thought. So I got my heart broken pretty hard.”

Even still, she didn’t mind kissing and telling about other Hollywood hunks.

“I can’t lie. It didn’t suck making out with Channing [Tatum] and Justin [Timberlake].”

Inside Elle: That might be the happiest duck in the world. 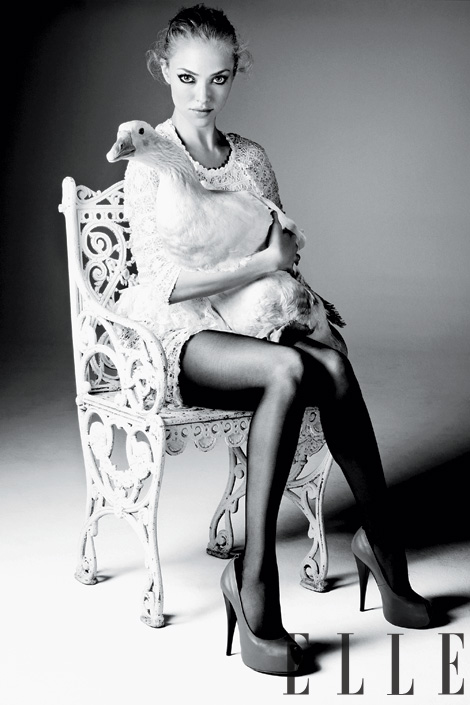 Amanda poses for her Alice in Wonderlnad themed photo shoot. Check out newsstands to read more about Amanda Seyfried in Elle!

For more on Amanda Seyfried >>