When does Lady Gaga not make an over the top entrance? The Grammy award winning fashion icon just keeps raising the bar on her unique style, and her recent visit to New York City was no exception. 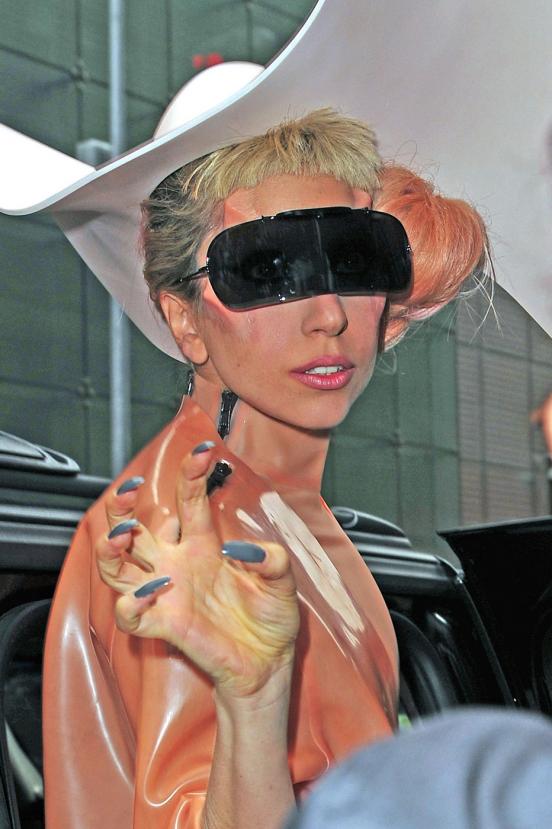 Lady Gaga turned some serious heads when she turned up for a television appearance in New York City wearing a very typical Gaga dress, which appeared to be, well, a giant condom.

Along with her life size prophylactic, the Grammy Award winning Gaga also sprouted flesh-colored horns on her head, wore a plastic white hat one her oddly bunned head and gave Freddy Krueger a run for his money with steel gray dagger nails. Oh, and she was wearing sunglasses that looked like a censorship bar. ‘Nuff said.

Are horns the newest fashions trend?

With so much going on, you have to wonder just what the news anchors were supposed to look at? In what must have been a clearly distracting interview, Gaga talked about lots of things, not the least of which was her nutty fashion sense that is taking the web — and the world — by storm.

Gaga spoke about working with the MAC Viva Glam campaign, of which her latex condom outfit was inspired. (Um, I’d like to hear that explanation). Then, not unexpectedly, Gaga also talked about safe sex.

She then signed autographs for “little monsters” outside the studio. I have one question: Where did she store the pen?

With the juggernaut success Lady Gaga is enjoying, there is no end to her wild style choices in sight.

Get even more celebrity style with celebrity fashions and celebrity hairstyles >>

Durable Patio Umbrella Stands That Won’t Let You Down

The Best Mortar and Pestle Sets to Elevate Your Dinner Table