Many celebs have amazing fashion sense, but some…not so much. Though Jersey Shores‘ Jenni “JWoww” Farley has cleaned up her act on occasion, she normally looks very tacky. And on New Year’s Eve, she was tackier than ever. 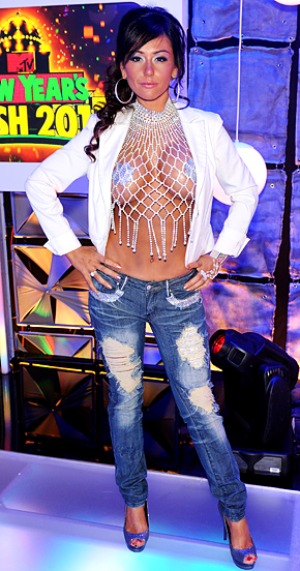 JWoww, of Jersey Shore fame, showed up at the MTV New Year’s Eve special wearing torn jeans and a barely-there top with pasties.

The breast-baring chain top was so risque that even MTV had a problem with it.

A source told UsMagazine.com, “JWoww wanted to wear just her chains and pasties without her blazer for the MTV New Year’s Eve special,” but MTV wanted her to cover up. “Her management made her wear the blazer as well to abide by MTV’s Standards & Practices.”

What do you think of JWoww’s look?

Check out even more of your favorite celebrities’ style>>

More about the girls from Jersey Shore:

Did You Know You Can Find Vintage Le Creuset on Etsy?