The homeless Ted Williams is on the verge of having his dreams come true thanks to a viral web sensations. Read on to learn and hear more about the man with the amazing pipes. 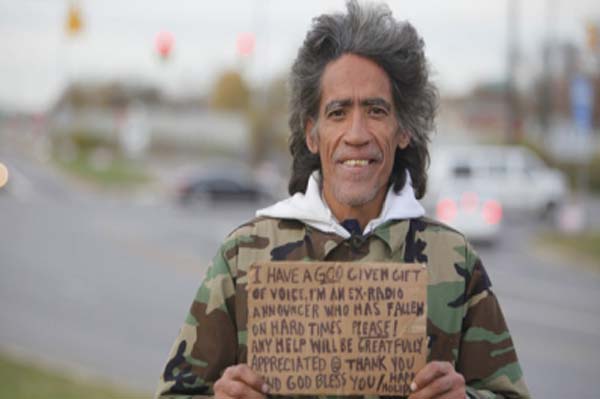 It seems like only yesterday that Ted Williams — the homeless Cleveland man with an amazing voice — was holding a sign on the side of the road asking for dollars.

Oh wait, it seems like yesterday because it was just yesterday.

A reporter with the Cleveland Dispatch interviewed the man with the golden baritone voice about his drug and alcohol-filled past and his aspirations for a voiceover career. The video went viral within hours and Williams is now getting his wish.

The Brooklyn, New York-born Williams studied radio before falling on hard times. Now, a $15,000 donation and a temporary gig at a Cleveland radio station have come his way.

The Cleveland Cavaliers have reportedly offered him a job, presumably for voiceover work, and the team at NFL Films has contacted him about voicing for them.

In the video, Williams says that he hopes someone at a Cleveland radio or TV station will hear his voice and offer him a job. It now looks like he’s going to get a lot more than that and he’ll be able to kiss his life on the highway goodbye.

The American Dream is alive and well.

Listen to Ted Williams and his golden voice

24 hrs ago
by Marshall Bright