Composting is the process where organic waste biodegrades naturally into nutrient-rich soil, which can then be used to grow new organic matter, but if the idea of composting invokes images of a smelly pile of garbage slowly decaying in your yard, clear your mind! To a serious gardener, for example, compost invokes visions of healthy abundant plants, tomatoes the size of grapefruit and rose bushes fit for a royal garden. 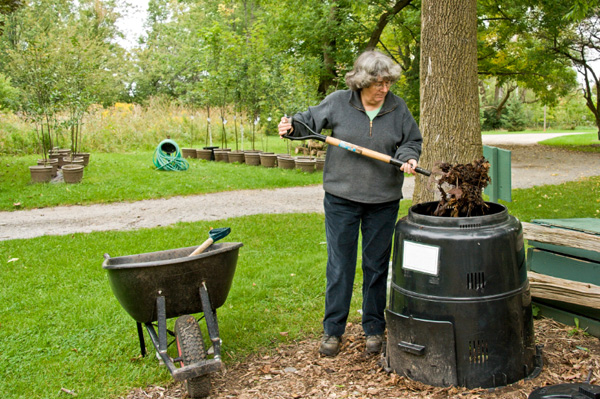 Composting is not only great for those who use the compost but it has many environmental benefits as well.

When food waste goes to landfills, it cannot decay efficiently and produces methane, a greenhouse gas. Composting these organic materials that have been diverted from landfills reduces the emission of methane into the environment. The large amount of methane gas in our atmosphere is a known contributor to global warming.

Composting is known to regenerate poor soil by encouraging the production of beneficial micro-organisms (mainly bacteria and fungi), which then break down organic matter to create humus. Humus helps retain moisture and naturally increases the nutrient content in soil. As a result, food grown in composted soil has shown to contain more nutrients and be more beneficial to eat.

According to the EPA, the composting process has been shown to absorb odors and treat volatile organic compounds (VOCs) like heating fuels and explosives. In some cases, wood preservatives, pesticides, and both chlorinated and nonchlorinated hydrocarbons in contaminated soils were eradicated by the compost process.

Compost has been shown to prevent erosion on embankments that are parallel to creeks, lakes and rivers, as well as lessen turf loss on roadsides, hillsides, playing fields and golf courses. Imagine football season without good turf!

Water is at a premium these days and composted soil reduces the amount of water consumed by plants. Composting can also reduce plant diseases and pests, lessening the need for expensive chemicals and fertilizers. A higher yield of agricultural crops grown in composted soil equates to more products that can be sold, and the EPA states that composting provides a less expensive alternative to conventional ways to remediate (clean) contaminated soil, putting money back into the tax payer’s wallets.

The next time you want to plug your nose at the idea of composting, remember the benefits of this process in maintaining the delicate balance of the ecosystem as waste decays back into the soil naturally, reducing pollution and increasing soil quality.

How to make compost

More ways to go green in the new year