Combine the American recession with the extravaganza of food, cultural immersion, and shopping that is Spain, and it’s no surprise students are choosing to study overseas to get their Spanish on. The Spanish Federation of Schools of Spanish as a Foreign Language (F.E.D.E.L.E.) accredits various schools, so Americans as well as international students of all ages are visiting — for a few weeks, months, sometimes even years. 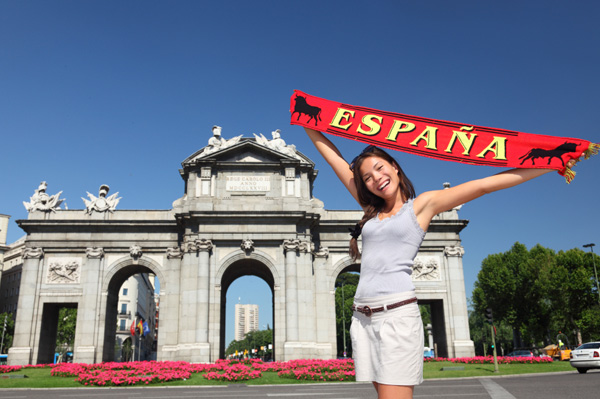 An adventurous way to learn a language

For Anita Bolitz, staying in Alicante for four weeks on a holiday visa was like an extended field trip, español-style. Options to live with a family – for 24/7 cultural immersion, along with an almost daily dose of paella — are available, but Bolitz chose to live in an apartment with three roommates (from Germany, Australia and Italy), and got the most out of the experience at the Colegio Internacional Alicante.

She chose Alicante, along the Mediterranean coast, among other reasons because she wanted “a medium-sized city that has an old town and access to the beach,” and she took full advantage of that, frequently going on weekend excursions that included bicycling along the waterfront.

She is learning the basics of Spanish in the daily programs, but her ultimate goal is to prepare her job interviews to demonstrate her multi-cultural approach.

International “field trips” like these offer so much more than just the usual tourist experience. Sure, bigger cities like Madrid or Barcelona are glamorous, but Bolitz chose Alicante because she felt it would give her a more typical experience.

Which is not to say that Alicante, and other nearby towns like Denia, Castellon, and Valencia, Spain’s third-largest city, don’t offer amazing sights you can’t find anywhere else.

Fallas for art and fireworks

In Denia there’s Fallas, the annual over-the-top celebration in early spring, leading up to March 19. Each community creates large statues made out of paper mache, all but one of which are involved in a grand parade, then torched on the last night, with huge bonfires (and plenty of extra firefighters standing by). Revelers celebrate in the streets as fellow celebrants light fireworks.

In Castellon there’s the impressive fish market, open-air museum and the ubiquitous department store El Cortes Ingles. The region has tapas, late-afternoon sangria, and chillaxing on the beach, all right at your doorstep.

Some students love the area so much they never leave. Maria Ramirez, a Barcelona native now living in Alicante, says Spain has the best of everything — a splash of American pop culture, along with Spanish traditions such as siestas, late-night eats (dinner doesn’t usually begin until 10 p.m.), and of course, fiestas.

A welcome break from high tech

For example, although there is a Spanish version of Saturday Night Live, Spaniards (and ex-pats) also have access to the American version of SNL. “I like yours better!” Ramirez quips. As for the lifestyle, she loves the small-town feel of Alicante. Even though they have access to Facebook, Alicante tends to be about old-school charm — they’re not into online dating as they often see people out and about whether it’s at a gallery opening or at the cinema.

It’s no wonder generations stick around this coastal part of Spain. Nestled right on the water, seafood is a staple. “I love paella with fish,” says Ramirez. “This is a basic dish and we boil fish with it to make it really tasty.” As for other dishes? She recommends a Spanish omelet of potatoes, eggs, onions and pepper.

Whether you’re a student like Bolitz for a short sojourn, or a transplant from elsewhere in España like Ramirez, check out the small-town charms of the real España.

San Sebastian is the surf, tapas, and party capital of the Basque country in Spain. Join the Wine Travelers as we take a break from the vineyards and cellars of Europe to explore this incredible city.