A Facebook spokesman says that the social media giant will not take down the page for the controversial WikiLeaks, despite growing backlash. How do you feel about this controvery? 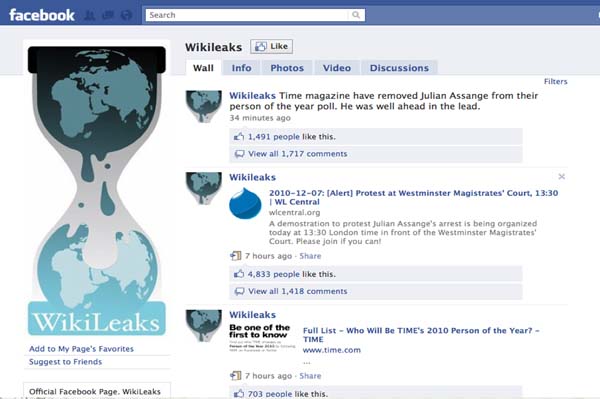 Facebook is now the lone wolf in the WikiLeaks battle. The social networking giant will not shut down the controversial website’s Facebook page, despite growing backlash against them.

“The WikiLeaks Facebook Page does not violate our content standards nor have we encountered any material posted on the page that violates our policies,” Facebook spokesman Andrew Noyes told ReadWriteWeb.

“We haven’t received any official requests to disable the WikiLeaks page, or any notification that the articles posted on the page contain unlawful content. If we did, of course, we would review the material according to our rules and standards, and take it down if appropriate,” Noyes went on to tell the Los Angeles Times.

PayPal, Mastercard all say “no”

The heat on the Julian Assange-backed WikiLeaks has reached fever pitch over the past few days as several businesses have banned WikiLeaks from their services. First, Amazon removed WikiLeaks from their servers after a boycott threat. Then, PayPal closed down their donation account for violating their Terms of Service. MasterCard announced Monday that they’ll stop processing donations for the website and today comes word that Assange’s bank accounts are now frozen.

Assange finally turned himself in to British authorities Tuesday morning after arrest warrants were issued for sex crimes in Sweden. He’s now being held without bail and vows to fight extradition to Sweden.

Bank of America: The next WikiLeaks target

Assange says WikiLeaks will release more documents, deemed “Insurance” if he’s thrown in jail or harmed. These documents are said to include everything from more government secrets to Bank of America documents.

“We are sitting on 5GB from Bank of America, one of the executive’s hard drives,” Assange told Computerworld magazine in 2009. “To have impact it needs to be easy for people to dive in and search and get something out of it.”

What do you think of the WikiLeaks controversy?

5 hrs ago
by Jessica Arnold