Donations to resurrect celebrities from their “digital deaths” are taking a lot longer than expected. What could be to blame for the slow donations? 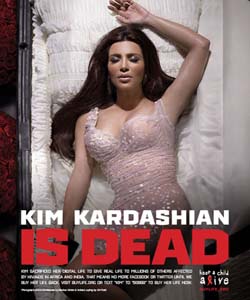 The premise sounded good, on paper: several big-time celebrities would commit a sort of digital suicide and sign off Twitter and other social media to raise $1 million for AIDS research.

Great idea — if fans were donating to resurrect their favorite stars from their “digital death.” The celebrities — including Kim Kardashian, Justin Timberlake, Lady Gaga, Jennifer Hudson and Alicia Keys — were expected to raise the money within a day or so. They’ve only raised around $296,000 as of Sunday night, Dec. 5.

The slow donations mean that these stars will remain in digital purgatory until they raise the money or just decide to cut their losses and move on. We’re talking about celebrities here — how long can they go without self-promotion? We bet most of them are going through serious withdrawals right now.

And — as much as we love celebs — it’s nice not to have our Twitter feeds clogged up with each of their 450 tweets an hour.

The slow fan donations may have something to do with their approach to the campaign. Yes, most people would agree that donating to a cause like AIDS research is a good thing — however, fans have to donate a minimum of $10 to participate. The amount might not seem like much, but it is to the young fanbase of most of these stars.

Plus, the official website for the campaign includes “glamour” shots of celebs “dead” in coffins. Some even said that the campaign is just another way that self-important celebs are promoting themselves.

We don’t doubt that the intentions were good – but it’s likely that celebrities will think long and hard about participating in a charity stunt that gives them a huge blow to their egos.