The deals are hot for Amazon Black Friday 2010. The web superstore is already offering Black Friday deals on thousands of items on the site. Read on to find out the details! 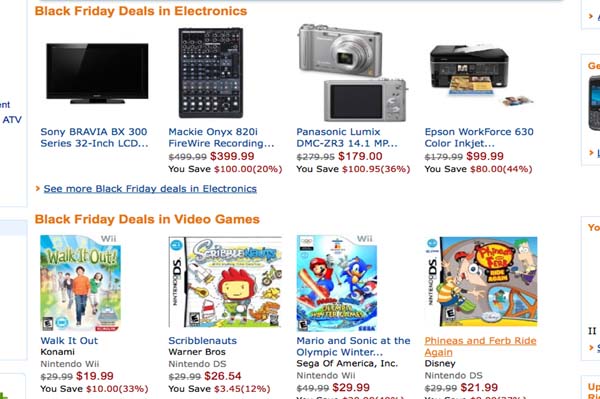 Amazon has already launched their Black Friday 2010 and Cyber Monday 2010 deals in order to get a leg up on big-time competitors like WalMart and Target.

Pretty soon there won’t be a Black Friday or Cyber Monday to speak of — the holidays sales will start before Halloween!

Amazon is definitely giving other retailers a run for their money, especially with the consumers who hate crowds and love free shipping. Amazon Black Friday 2010 deals are updated daily with new specials announced almost every hour on everything from clothing to personal care to electronics.

What’s better? Amazon is matching the prices for other retailers — so the Target Black Friday ad and WalMart Black Friday ad deals are also good on Amazon. Just check their website for specific rules.

It’s a pretty amazing offer — especially since most purchases on Amazon don’t include sales tax.

There’s no way that we could explain all of the Amazon Black Friday and Cyber Monday deals, but here are a few of the good ones we found:

Amazon is known for limiting quantities on some of their hottest Black Friday deals, so don’t delay if something on the site catches your fancy.

What did you score from Amazon’s Black Friday 2010 deals?