Jimmy Kimmel annointed Nov. 17 as National Unfriend Day. What is this all about and should you join in it? 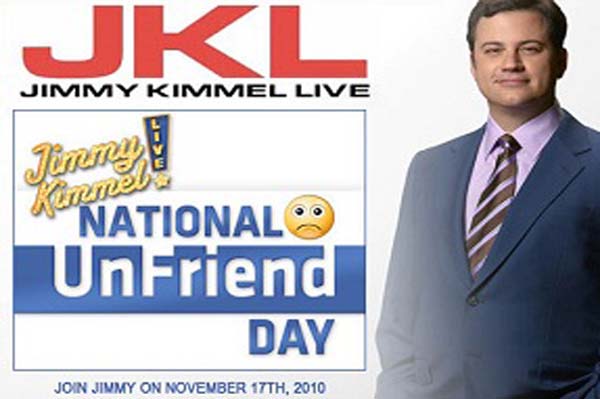 Kimmel proposed National Unfriend Day on his show as a way to weed out those people on Facebook that you never talk to. You know the ones: you had one class with them in 8th grade and now they want to be BFFs on Facebook.

Kimmel wants you to stop the madness — because really, no one has that many friends. Not even Justin Bieber or Lady Gaga.

“What’s the worst that happens? Somebody you don’t want any part of in the first place, maybe they’re a little bit wounded, you don’t have to deal with them anymore,” Kimmel said.

So true. We admit, we’re reformed Facebook friend collectors. However, we saw the light months ago and started trimming the fat from our personal online lives. Now we follow a good rule of thumb: if we don’t talk to you in real life, you aren’t going to be our Facebook friends.

Harsh? Yes. But it’s necessary — especially with all the security breaches on Facebook as of late. How do you really know that the guy you met at a party once three years ago won’t try to hack into your account? Sure, a little overboard, but it happens.

Will you join in on National Unfriend Day today?