The Beatles are coming — to iTunes! The Beatles and Apple overcame their years-long fight to offer the full Beatles catalog on iTunes. Read on to get all the details! 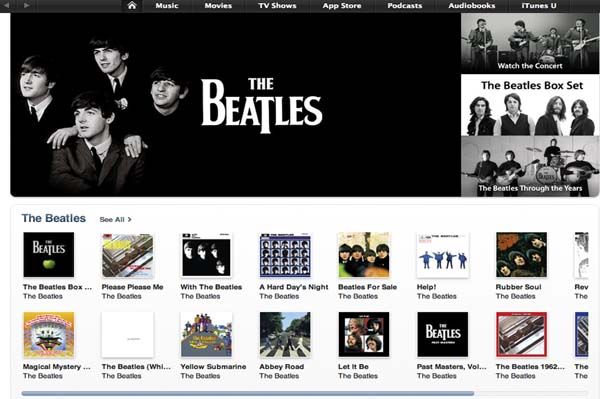 The Fab Four are invading again — this time on iTunes. The Beatles on iTunes is the big Apple announcement for Nov. 16 and fans couldn’t be more excited.

The simple announcement on the iTunes site read: “The Beatles. Now on iTunes.” A simple statement for something so huge.

“We love the Beatles and are honored and thrilled to welcome them to iTunes,” Apple founder Steve Jobs said in a statement. “It has been a long and winding road to get here. Thanks to the Beatles and EMI, we are now realizing a dream we’ve had since we launched iTunes 10 years ago.”

The Long and Winding Road he’s referring to isn’t the song — it’s the fight to get to this point. The Beatles have squabbled with Apple for years about offering their library on the site. Now, they’ve come to a (likely lucrative) agreement.

Thirteen remastered Beatles albums will be available for download on iTunes, along with a special digital box set. Each Beatles album will cost $12.99, double albums for $19.99 and will come with iTunes LPs, a mini-documentary about each album’s recording process. Individual downloads will cost $1.29 each.

Beatles Sir Paul McCartney and Ringo Starr both shared their excitement over the deal.

“We’re really excited to bring the Beatles’ music to iTune in a statement. “It’s fantastic to see the songs we originally released on vinyl receive as much love in the digital world as they did the first time around.”

Starr echoed McCartney’s statement with a funny comment on the years-long squabble.

“I am particularly glad to no longer be asked when the Beatles are coming to iTunes,” Starr said in a statement. “At last, if you want it — you can get it now — the Beatles from Liverpool to now. Peace and Love, Ringo.”

Are you excited for the Beatles on iTunes?