Apple is set to make a big iTunes announcement Tuesday morning. What could Steve Jobs have up his sleeve? 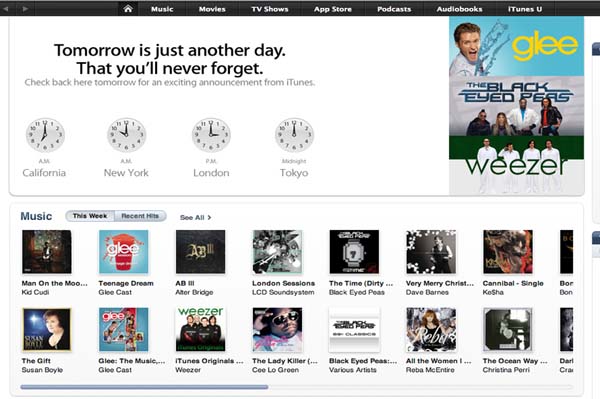 We pretty much live on iTunes, so imagine how excited we were when we fired up iTunes this morning and saw a teaser for a Tuesday morning announcement: “Tomorrow is just another day. That you’ll never forget.”

What is the announcement?

Apparently this is shaping up to be a week in huge tech news. First it was the announcement of Facebook email and now a big iTunes announcement. We really can’t wait until tomorrow, so we’re already checking out what the experts are saying about the announcement.

Sadly, no one really has the inside scoop on what the announcement could possible be. Some are thinking Apple founder Steve Jobs will announce a new cloud-based iTunes where users can access their music, movies and iTunes data from anywhere. Still, others think it’ll be something about streaming music or upgraded Apple TV options.

No one really knows what the announcement will be — and it’s so frustrating.

Guess we’ll just have to wait until 10 a.m. Eastern time for the official Apple iTunes announcement. We know it’ll be something pretty amazing, whatever it is (we’re Mac addicts.) However, we just wish Apple would bite the bullet and officially announce the Verizon iPhone release date.

Is that too much to ask, Apple? We don’t think so!