Queen Elizabeth and the rest of The British Monarchy officially joined Facebook on Monday. What are they revealing to their loyal followers? 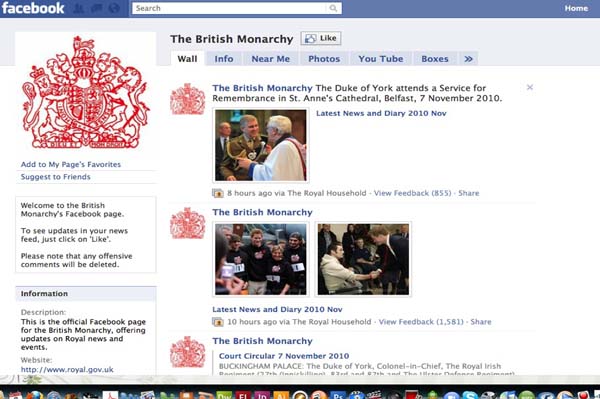 What’s the proper way to bow to Queen Elizabeth, on Facebook?

That’s right, Her Magesty and the rest of the royal crew officially joined the super-popular social networking website on Monday. Well, it looks like her royal handlers are updating the account instead of the Queen — which stinks because we had a vision of the Queen sipping tea in her drawing room while taking a “Which Jersey Shore character are you” quiz on the site.

The page is deemed as the “official Facebook page for the British Monarchy, offering updates on Royal news and events” and already offers up official photos of Princes William and Harry, Her Magesty and other British Royalty. The page also offers links to offical royal websites, including their YouTube, Flickr and Twitter accounts.

Queen Elizabeth is known for her penchant for all things tech, including iPods. No word if the Queen will ever chat directly with her fans on Facebook — 177,000 and counting — but the messages directed toward the royal family are already filling up the page.

“I love the entire Royal Family. I have always wanted to be one of them. I was so envious of Princess Anne when I was little. I wanted to be her because she got to ride horses and probably slept in a canopy bed. God Save The Queen,” one Facebook fan wrote.